Updated On September 23, 2022 | In Dating , Pregnant , Relationship
Share this 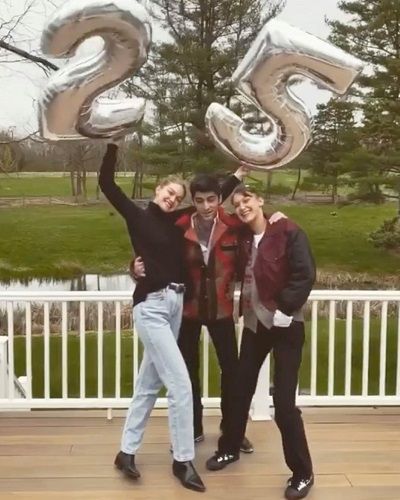 Update: Gigi and Zayn’s daughter Khai Malik was born in September 2020. Sadly, the power couple split at the end of 2021. Though they are not together, they have promised to co-parent their daughter.

Recently, Gigi celebrated her 25th birthday party which also seemed like a gender reveal party. Bella shared a picture on Instagram where there was also a blue Baby Shark gift bag that was filled with pink tissue paper, which suggests guests were encouraged to predict the gender of the baby.

Another hint on the party being gender reveal was that there was a pink and blue string tied to Gigi’s silver ’25’ balloons. One of her fans wrote,

“Bro, WE’RE SO DUMB. The blue and pink strings – it was a gender reveal party as well?? Also I think that it’s a boy since Gigi is holding the balloon with blue strings.”

Had the sweetest day celebrating my 25th birthday with my quarantine family, who made it so special for me, along with all the love I felt from all over the world! Thank you to everyone for the birthday messages, I carried you with me yesterday!! ?? I am grateful and lucky that my family and friends -near and far- are healthy and safe, and although I missed loved ones I wish I could have celebrated with, know that these times will make us even more grateful for togetherness to be had in the future ! I will never forget my 25th bday! +++The icing on the perfect quarantine bday was finding out my surprise everything-bagel-cake was made by the one and only Cake Boss @buddyvalastro who I have watched for over a decade. I CRIED REAL TEARS! BUDDY! This is a dream come true. I can’t believe you made this cake for me while the bakery is closed. It means more to me than you know, and when we hopefully meet some day you will truly know that there almost isn’t an episode I’ve missed. 10/10 would be a Carlo’s intern whenever needed. ? Grateful, honored, your biggest fan. ?????

“Here’s what I’m thinking; Gigi is crying because they got a gender reveal. Her balloons and blue and pink string on them. And one of her gifts had a baby shark gift bag.”

Even the couple did not make it obvious that it was a gender reveal but fans cracked the code. The couple who have been dating since 2015 are expecting a baby boy.

Also read Actress Lea Michele is pregnant! It is her first child with husband Zandy Reich!

The Hadid sisters have been spending time together in this quarantine. They have been baking and cooking to pass the time. Bella was seen trying Tan France’s cookie recipe and Gigi was whipping up breakfast tacos and banana muffins.

Likewise, Bella previously used food to urge her fans to stay home amid the COVID-19 pandemic.

Net worth of Gigi and Zayn

Zayn Malik has an estimated net worth of $65 million and Gigi’s net worth is $29 million. One Direction collected $75 million between June 2013 and June 2014. He has an apartment in New York that is in the market for $10.8 million.

Similarly, his London house has an indoor pool which was worth £2.2 million. Gigi has an apartment in the Noho area of Manhattan worth £3.09million which has two bedrooms, two bathrooms, and a chef’s kitchen.

Also read After a miscarriage, Hope Solo gave birth to twins baby with husband Jerramy Stevens! How much is her net worth?

Gigi Hadid is an American fashion model. She became known especially after making her debut in the Top 50 Models ranking at Models.com. Read more bio…

Zayn Malik is a British singer and songwriter. He is best known as a former member of highly successful British boy band, One Direction alongside Niall Horan, Liam Payne, Harry Styles, and Louis Tomlinson. He has received eight Teen Choice Awards with the band. Read more bio…