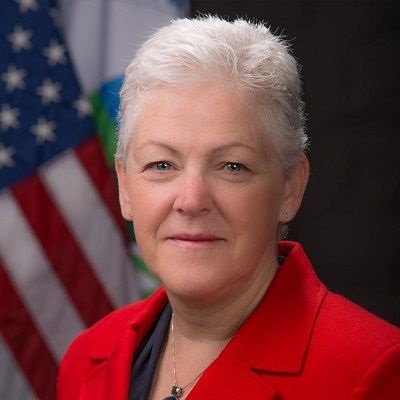 I love disagreements. I love the democratic process. If I'm in a room where everybody agrees, I start to nod off.

Gina McCarthy is married to a wholesale floral salesman Kenneth McCarey. They have been happily married for decades.

They have 3 children: Daniel, Maggie, and Julie. She prefers to play golf with her son Daniel. Her son is a good golfer.

Who is Gina McCarthy?

Gina McCarthy is an American expert in environmental health and air quality. She served as the thirteenth Administrator of the Environmental Protection Agency. President Barack Obama nominated McCarthy as head of EPA in 2013.

Gina was born on May 3, 1954, in Boston, United States. Her full name is Regina McCarthy. She was raised in Dorchester, Massachusetts. McCarthy likes to keep her personal details far from the media. She revealed that her mother used to work in a doughnuts factory.

In 1976, she graduated with a Bachelor of Arts in Social Anthropology from the University of Massachusetts Boston. She received a Masters of  Science in Environmental Health Engineering and Planning and Policy in 1981 from Tufts University.

She served as Commissioner of the Connecticut Department of Environmental Protection. Gina held several top positions in civil service of the Commonwealth of Massachusetts including Undersecretary and Deputy Secretary.

From 2009 to 2013 Gina held the position Assistance Administrator for EPA Office of Air and Radiation. Gina has worked on Environmental Issues at the state and local levels. Likely this expert also served as an environmental advisor for five Massachusetts governors.

According to some observers, President Obama’s selection of Gina confirmed his seriousness about battling climate change.

She also taught a course in the Department of Environmental Health at Harvard T.H. Chan School of Public Health. She was the school’s Commencement Speaker in 2017.

McCarthy finalized the rule under the ‘Clean Water Act’which proposed a new inclusive definition of ‘waters of the United States’. In 2017, Gina served as an operating advisor focused on sustainability and wellness investments on Pegasus Capital Advisors.

Gina McCarthy: Salary and Net Worth

According to E&E News, the average salary of this Environmental Health Advisor is $179,700. According to washintongexaminer, her estimated net worth is $349.4 million.

Gina McCarthy said her agency did nothing wrong using social media to promote a major water rule during a public comment period. She also told her portrait was missing from President Trump‘s EPA.

She has grey eyes and her hair is white. She has a decent height equivalent to her weight.