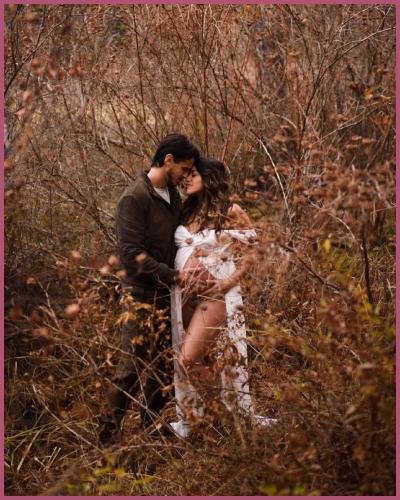 Gina Rodriguez, who is expecting her first child with her husband Joe LoCicero, has shared photos from her recent maternity shoot. The actress announced her pregnancy on her 38th birthday, July 30, 2022. The forthcoming baby will be the first child of Gina and Joe.

The Jane the Virgin alum took to Instagram on Tuesday, November 29, to show off the stunning photographs from her recent pregnancy shoot, which she shared with her adoring fans.

Gina gave a rare glimpse of her growing belly in a breathtaking maternity photoshoot alongside her husband Joe LoCicero. The stunning couple is shown outside in a spectacular autumnal scene.

The soon-to-be mom dons a white off-the-shoulder gown that opens in the middle to reveal her baby bump. Joe, on the other hand, can be seen tenderly pressing his head against hers while cradling Rodriguez’s belly.

“Just the three of us, alongside a red heart emoji”

Loved ones are excited to welcome a junior, Gina or Joe

A number of other celebrities flocked to the comments section to gush over Gina’s sweet photo of herself showing off her tiny baby bump with her husband after she posted the adorable image.

Gina Rodriguez first met Joe LoCicero in 2016, when he appeared as a guest star on a season two episode of Jane the Virgin.

The couple only became Instagram official on January 29, 2017, and have since continued to celebrate their love. Things became even more magical when they got engaged on July 30, 2018, and the journey began.

Gina Rodriguez is a very talented TV actress. Similarly, she is also a film actress. Gina is active in the field since 2004.

Presently, she is famous for starring in the satirical romantic comedy-drama series, “Jane The Virgin”. She portrayed the role of Jane Villanueva in it. Her dominant performance in it won her a Golden Globe.

Furthermore, she is popular for projects like “The Bold and the Beautiful,” and “Deepwater Horizon”. See more…