Gina Shkeda is a Canadian YouTuber. Currently, she runs a YouTube channel. 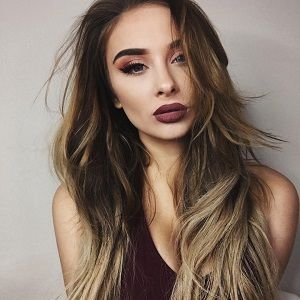 What is the relationship of Gina Shkeda?

The 22-year-old Canadian YouTuber, Gina is an unmarried woman. However, she is in a relationship with her boyfriend, Max. The couple has been carrying on their love life for several months.

Furthermore, she has been also spotted several times with her boyfriend in the public and in media. Apart from him, she has never been involved in any affairs. Currently, Gina and Max are enjoying their love life and living elegantly.

Gina Shkeda is a Canadian YouTuber. Currently, she runs a YouTube channel GinsMakeup on which she has earned over 501k subscribers. Furthermore, she also an Instagram account on which she has more than 811k followers.

Gina was born on June 2, 1995, in Canada. Moving towards her nationality, she is Canadian and her ethnicity is unknown.

As a child, she developed her interest in YouTube. Talking about her education, there is not any information regarding her educational background.

Since she created her YouTube channel, she has been posting various videos relating to makeup. Furthermore, she has gained millions of views on her various YouTube channels.

Some of her most-watched YouTube videos are Glam FALL Makeup, GET READY WITH ME- to a random not super significant, Single AF Valentines Day Tutorial, and The REAL No Brushes Makeup Challenge.

She has also worked for Tarte Cosmetics with Trippin With Tarte along with other YouTubers Rachel Levin, Christen Dominique, and Nicol Concilio.

Being a famous YouTuber, she pockets a handsome amount of money from her profession. However, her salary and net worth are unknown.

As of now, Gina has not won any awards in her career. Although, she has been doing a great job and shortly, she will grab some awards.

So far, there are not any drastic rumors regarding her personal and professional life. Moreover, she has never faced any controversy in her career to date. It seems Gina has full focus on her work rather than being stuck in any controversy.

Also get to know more about the birth facts, education, career, net worth, rumors, height, and social media of different personalities like Abby Rao, Jacob Macias, and Faze Jarvis.