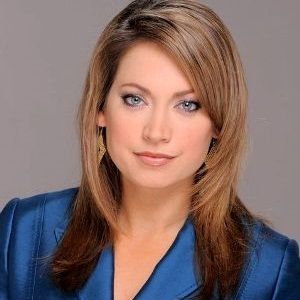 No matter the natural disaster I've covered, whether it's a wildfire or flood, I always come back with a much greater perspective

Anorexia is a real disease. The choice you do have is asking for help

There have been struggles and challenges that I have faced that few know about but I hope will help others going through the same thing.

Since 2014 Ginger Zee and Ben Aaron are together

Ginger Zee is married to his longtime boyfriend Benjamin Aaron Colonomos on June 7, 2014, in Petoskey, Michigan.

The couple wed after 10-month-engagement. On June 29, 2015, Ginger announced on Good Morning America that she and Ben were expecting their first child in December.

Ginger and her husband found out they were expecting a boy.

She revealed her pregnancy with her second child on Good Morning America on August 14, 2017.

Miles Macklin, her second son, was born in February 2018.

Who is Ginger Zee?

Before that, she was their weekend Meteorologist. Zee is the Chief Meteorologist for all of ABC News platforms.

Furthermore, she is the CBM Seal holder in meteorology.

Zee was born Ginger Renee Zuidgeest on January 13, 1981, in Orange, California. Her nationality is American and her ethnicity is Dutch.

Zee was named after “Ginger” from Gilligan’s Island by her Dutch father, due to his love of the show that helped him learn English.

In her extended family, Zee has a stepfather and two half-sisters. Zee’s paternal grandparents, both immigrated to the United States from the Netherlands.

Zee once said that she chose to be a Meteorologist because she said during her childhood she saw a waterspout on Lake Michigan when she was eight.

Her mom told her to get inside but she was mesmerized. She really thought it was the coolest thing she had ever seen.

In 1999, Zee graduated from Rockford High School in Rockford, Michigan. After that, she went on to Valparaiso University.

There, she graduated with a Bachelor of Science degree in Meteorology as well as a major in both mathematics and Spanish.

Her goal at graduation was to be a Meteorologist on The Today Show by the age of 30.

After graduating from college, Zee worked for various media outlets such as WEYI-TV in Flint, Michigan, WYIN-TV in Merrillville, Indiana, WLAV-FM, and WOOD-TV both in Grand Rapids, Michigan, and WMAQ in Chicago, Illinois, an NBC owned and operated the station.

While working at WMAQ from 2006 to 2011, Zee was asked once to fill in as a guest meteorologist on the weekend edition of The Today Show.

This was an opportunity to fulfill her high school goal. In addition, Zee is an American Meteorological Society (AMS) Certified Broadcast Meteorologist.

She occasionally appears on other ABC programs such as Nightline and ABC World News Tonight.

She succeeded Sam Champion, who took a job with The Weather Channel.

On March 4, 2016, Zee was announced as a celebrity competitor on the 22nd season of ABC’s Dancing with the Stars.

She was paired with professional dancer Valentin Chmerkovskiy.

The couple reached the finals of the show and ended in third place.

There had been some rumors and controversies regarding her time on Dancing with the Stars because her partner, Nyle DiMarco was furious with her.

There were also controversies stating that judge favored her despite her bad performance.

Ginger has a height of 5 feet 7 inches. Her body weighs 56kg. She has blue eyes and brown hair.

What disease does Ginger have?

At the age of 21, she found that she was a patient with Narcolepsy.

What is Amy Robach's salary?

Does Ginger Zee have a college degree?