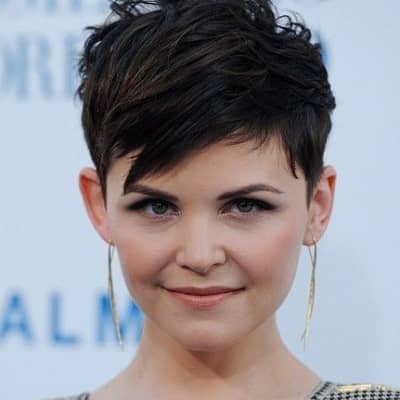 Source: We Heart It

But I love being scared. I think you're brave only when you do things that scare you. I've always used fear as a motivator. I'm not sure why.

You know, one of my biggest dreams in life is to play a Disney princess.

Everything goes with short hair. It's bananas.

Ginnifer Goodwin is a married woman. She exchanged vows with an actor Josh Dallas on 12 April 2014 in California.

She and Josh started dating since 2011 at the time of Once Upon a Time and got engaged in October 2013.

Previously, Ginnifer was engaged to an actor Joey Kern in December 2010, and later they ended their engagement in 2011 May.

Who is Ginnifer Goodwin?

Ginnifer Goodwin is an American actress and voice artist. She is best known for her roles in the HBO drama series Big Love, and in the ABC fantasy series Once Upon A Time.

This actress was born on 22 May 1978, in Tennesse, the United States with a birth name Jennifer Michelle Goodwin.

She graduated with a Bachelor’s degree in fine arts from Boston University. After the University, she attended Shakespeare Institute.

Royal Academy of Dramatic Arts honored her with the ‘Acting Shakespeare Certificate’. Goodwin graduated with the honor of the ‘Excellence in Acting: Professional Promise Award’ by the Bette Davis Foundation.

Ginnifer Goodwin made her professional debut with NBC TV series Law and Order in 2001. Between 2001-2003, she starred as Diane Snyder in television series Ed.

She later had substantial roles in the TV films, and series including Five, Electric City, Who Do You Think You Are? Killing Kennedy, The Twilight Zone, and more.

In addition to acting, she also gave voice in SpongeBob SquarePants, and Sofia the First. She played both Mary Margaret Blanchard and Snow White in ABC fantasy drama series Once Upon A Time between 2011-2018. Later, in 2019, Goodwin appeared in I Am Somebody’s Child: The Regina Louise Story, Heartstrings, and Why Women Kill.

Besides television, she has also worked in films. She made her movie debut in 2003 Mona Lisa Smile. The next year, Ginnifer played Cathy Feely in Win a Date With Tad Hamilton.

She has made her appearances in various films including Day Zero, Walk The Line, Birds of America, A Single Man, He’s Just Not That Into You, Ramona and Beezus. In 2011, she starred in Take Me Home Tonight, and Something Borrowed.

The average salary of Ginnifer is estimated at $72,000. Meanwhile, according to some sources, she has an estimated net worth of $8 million.

There is no rumor and scandal about this actress. Meanwhile, she has managed to keep herself out of rumor and controversy. She is doing great in her career.

Ginnifer Goodwin is 5 feet 6 inches tall and weighs 60 kg. Likely, she has brown hair and grey eyes. Her body measurement is 35-26-35.

Gloria Estefan
Tags : Actress Once Upon a Time Voice artist