Who is Ginuwine Dating?

Reflecting on Ginuwine’s private life, he is possibly single at the moment. Though, he has had an interesting relationship history with some beautiful ladies.

Then he had a romantic relationship with American singer, and actress, Aaliyah from 1996 to 1997.

After breaking up with Aaliyah, he was romantically linked with an American talk show host, actress, and businesswoman, Claudia Jordan.

In October 1999, he began dating American rapper, Solé. On September 8, 2003, they decided to take their relationship furthermore, by exchanging a marital vow.

Before their marriage, they were already parents to their two daughters named Story who has born on March 29, 2001, and Dream Sare Lumpkin who was born on November 1, 2002.

Due to personal issues, they ended their marriage via divorce on July 22, 2015.

Ginuwine has publically announced that all total, he is the father of 9 children, by different women. The name of his kids is Ramonda, Tiffany, Elgin, Ginel, Tahjair, Story, Dream, and half-children, Dejan and Cypress. 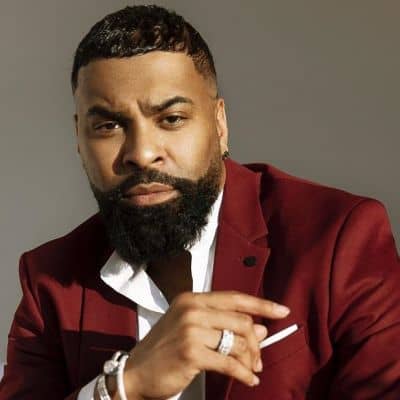 Ginuwine aka Elgin Baylor Lumpkin is an American singer-songwriter, dancer, and actor.

Ginuwine was born in Washington, D.C., the United States. Born on October 15, 1970, he is 51 years old as of 2022 belonging to the American nationality. He is of African-American ethnicity and Libra is his birth zodiac sign according to the astrological chart.

His father’s name is James II Lumpkin while the name of his mother is Sandra Lumpkin. Similarly, he has two siblings a brother named, James III and a sister named, Latisha Lumpkin.

Elgin Baylor Lumpkin is his full birth name while he is worldwide famous by his stage name, Ginuwine.

Apart from that, he went to Forestville Military Academy and later graduated with a paralegal associate’s degree from Prince George’s Community College based in Largo, Maryland.

Ginuwine debuted his career as a  member of the Rochester, New York-based record label, ‘Swing Mob’  where he worked on the music compound founded by Donald, ‘DeVante Swing’ DeGrate.

Then, he went on to work on different projects including his debut album, ‘Ginuwine…The Bachelor’, and the singles like, ‘Pony.’

In 1999, he released his second album, ‘100% Ginuwine’ featuring the hit singles, ‘Same Ol’G’, ‘So Anxious’ and ‘None of Ur Friends Business.’ His single, ‘Differences’ reached number one on the Billboard Hot R&B/Hip-Hop Songs Chart.

In 2001, he lost both of his parents. Firstly, his father committed suicide and a year later, his mother died of cancer. In 2002, he introduced his own label, ‘Bag Entertainment’ featuring artists like Knight and Jose Cenquentez.

On June 23, 2009, he released his sixth album titled, ‘A Man’s Thoughts’ including Brandy, Missy Elliott, Bun B, and Timbaland as the guest appearance.

He then made a collaboration with Tank and Tyrese and founded a group called, ‘TGT.’ In 2012, they signed a contract with Atlantic Records. In 2013, they released their debut album, ‘Three Kings’ which got in the Grammy Award Nomination.

In 2004, he was cast in the movie, ‘You Got Served’ playing the role of his real name, ‘Elgin.’ He was a cast member in the movie, ‘Juwanna Mann’ in which he portrayed R&B singer, ‘Romeo.

In the three episodes, ‘All this and Turkey, Too’, ‘You Say He’s Just A Friend’ and ‘on the Rebound’ of the American Television sitcom, ‘Moesha.’

The net worth of singer, Ginuwine is accumulated to be 1.5 million USD approximately. Furthermore, there are no authentic details about his annual salary as well as weekly earnings.

Meanwhile, he has an endorsement deal with Adult Chocolate Milk, a 40-proof vodka-based version of chocolate milk.

To date, there have not been controversies relating to the singer-songwriter, Ginuwine as he does not mix his personal as well as professional life.

Talking about the body features, Ginuwine stands tall with a height of 6 feet 2 inches and weighs around 85 Kg. He has a brown body complexion with black hair and eyes of the same color as well.

No other information, the wiki of Ginuwine’s chest-waist measurements, dress size, shoe size, and bicep size is available at the moment.

Besides, there is an official Facebook page under his name, which is enriched with over 1.1 million followers.

Other than this, he has a self-titled youtube channel, having around 414K subscribers. But he has not posted any videos since March 30, 2019, uploading his last video titled, ‘None of Ur Friends Business.’