Actor-Model Gisele Bündchen is married and a mother of two.

Gisele Bündchen is a married woman since 2009. She has been married to the famous American football player, Tom Brady for seven years now.

After dating each other for a few years, they got married on 26 February 2009. They have been married for over seven years and they are still together.

They together have a son and a daughter named Benjamin Brady and Vivian Lake Brady. They are living a happily married life and there is no sign of divorce at all.

Talking about her previous relationships, she dated the famous American actor, Leonardo DiCaprio for over six years. They began dating each other back in 1999 and broke up after six years in 2005.

After that, she dated Kelly Slater for two years from 2005 to 2007. There are no other records of her past and present relationships. 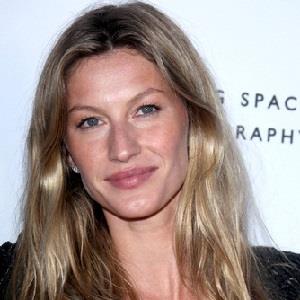 If you are happy, you can give happiness. If you don't love yourself and if you are unhappy with yourself, you can't give anything else but that.

I feel like when people judge me they're not judging me, because they don't know who I am.

I've always played sport, ever since I was little. I played volleyball and I believe sport teaches you a lot, such as teamwork, respect and discipline.

Who is Gisele Bündchen?

Gisele Bündchen is a famous Brazilian fashion model and actress.

She is one of the highest-paid models in the world, and as of 2007 was the 16th richest woman in the entertainment industry.

She is also the creator of the women’s footwear brand, Ipanema.

Gisele was born on 20 July 1980, in Horizontina, the Rio Grande do Sul, Brazil. Gisele is a Brazilian by nationality and is of German ethnicity.

Her birth name is Gisele Caroline Nonnenmacher Bündchen. She is the daughter of German parents, Vania Nonnenmacher and Valdir Bündchen. Her father is a college professor and writer.

Bündchen grew up in Horizontina, Brazil with her family. She has five sisters named Raquel, Graziela, Gabriela, Rafaela, and her fraternal twin Patrícia.

She completed her school education in her native place.

In 1993, she joined a modeling course with her sisters Patrícia and Gabriela at their mother’s insistence. In her childhood, she wanted to be a professional volleyball player and had even thought of becoming a member of the Brazilian team.

Gisele began her modeling career in 1994 when she was discovered by the Elite modeling agency. After that, she became second in the national contest, Elite Look of the Year.

At the age of 14, she moved to São Paulo in order to pursue her full-time modeling career. She got her first big break in New York City at Fashion Week in 1996. After that, she traveled to London to attend modeling auditions.

She made the cover of the French edition of Vogue. At the same time, fashion magazine i-D featured her on its cover. In 2000, Vogue stated that Bündchen was the world’s hottest model.

That same year, she was signed by Victoria’s Secret which helped solidify her status as the world’s top model. Rolling Stone was named “the most beautiful girl in the world” in 2000.

In 2006, she appeared as Serena in The Devil Wears Prada. In 2010, she worked as an executive producer in Gisele & the Green Team and gave her voice for the Portuguese version of the film. In 2014, she appeared in the music video, “Heart of Glass”. In July 2007 Forbes named her the world’s top-earning model.

She has a net worth of $400 million in addition to her $40 million salaries.

There is no rumor of her being in an extra-marital affair at the present time. Gisele has been criticized several times in her career.

In November 2002, Bundchen was paid a reported £320,000 and given two black mink coats by the American Fur company. In August 2010, she was highly criticized for her statements about breastfeeding.

Her hair color is light brown and her eye color is blue. Her dress size is 4(US) and her shoe size is 8.5(US).