Gladys Portugues is an American former female bodybuilder along with a film actress.

Gladys Portugues is a married woman. She tied the knot with a Belgian actor and martial artist, Jean-Claude van Damme. The two began dating each other in the 1980s and the lovers tied the marital knot on January 3, 1987. However, the couple divorced in 1992, but again remarried on June 25, 1999.

They have two children named Kristopher van Varenberg (born in 1987) and Bianca Brigitte (born in 1990). Currently, she resides in New York with her husband and children. Since then she has been living happily with Jean and further, there is no news of a breakup or split up. 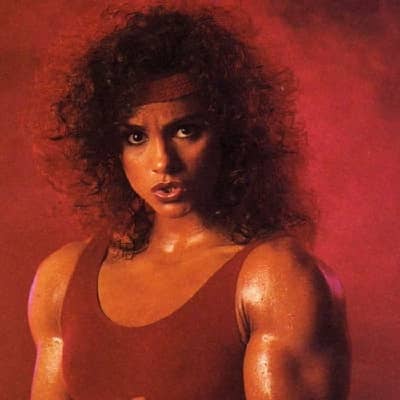 Who is Gladys Portugues?

Gladys Portugues is an American former female bodybuilder along with a film actress. She is best known for being in the top 10 in the Ms. Olympia contest. Furthermore, she is popular for the reality show, Behind Closed Doors.

In addition, she is the wife of Belgian actor and martial artist, Jean-Claude van Damme.

Gladys Portugues was born in Manhattan, New York, the United States on September 30, 1957. As of 2021, she will be celebrating her 64th birthday.

Her parents are not available on the Internet as she has not opened about them. She grew up in Manhattan idolizing Rachel McLish who is a winner of the Ms. Olympia contest.

Even though her name sounds Portuguese she is of American nationality. Her birth sign is Libra. Talking about her education, she completed her graduation from the Marymount Manhattan College.

Since then, she was seen many TV films such as Pumping Iron II: The Women, The Morning After, and It’s Alive III: Island of the Alive. Besides, TV films she has appeared in the British reality show, Behind Closed Doors which features her husband, Jean-Claude van Damme.

Gladys has not shared her financial status in the public. However, she shares a huge net worth with her husband, Jean-Claude van Damme which is over $40M.

There are no rumors and controversies about her. Gladys does not like the limelight and stays away from it.

Portugues stands 5 feet and 5 inches tall and weighs around 55 kg. She has an athletic body with 35-25-38 inches of measurements. She has black hair and brown color eyes.