Glen Powell is dating TV Host Renee Bargh. She is an Australian entertainment reporter, who is best known as a host of Channel [V] Australia.

He made it public on his 30th birthday that they had been dating for six months and were staying together. Despite her being two years old than him, they have been in relation.

They both make a cute couple and are getting serious about it. However, there have been no rumors about them getting married.

Previously, he has been in a relationship with Nina Dobrev. 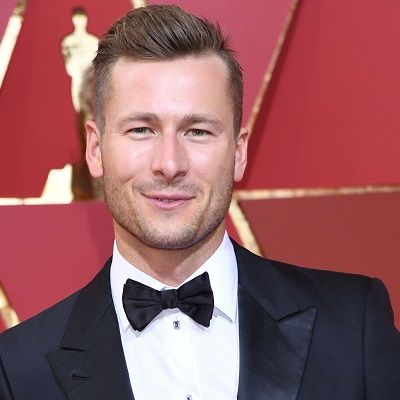 There's kind of a summer camp aspect of filming on location.

The peacocking nature of baseball players and athletes in general - you're all kinda competing for who's got the most swagger.

If you worry about what's going to end up in the final cut, it's like you're thinking about the endgame.

Who is Glen Powell?

Glen Powell is an award-winning American actor, writer, and producer.

He started his career with guest roles on TV and small roles in different films like The Dark Knight Rises and The Expendables 3 before making his breakthrough show the Fox comedy- horror series Scream Queens he played as Chad Radwell.

He has three siblings. His current age is 30. His father Glen Powell Sr. is also an actor famous for The Life of David Gale and The King and his mother Cyndy Powell.

He belongs to White-American ethnicity. Similarly, he holds an American nationality.

Powell is a Westwood High School graduate from the Round Rock Independent School District in southwest Austin.

He then went to the University of Texas at Austin, where he was a part of Sigma Phi Epsilon fraternity.

He began collaborating in Spy Kids with Antonio Banderas and Sylvester Stallone Game Over. Powell got a position in The Great Debaters in 2007 before his first year of college, directed by and featuring Denzel Washington.

Similarly, has featured in TV series like Scream Queens, Into the West, Jack & Bobby, CSI Miami Without a Trace, Rizzoli  Isles, and The Lying Game since moving to Los Angeles, along with The Expendables 3, Ride Along 2, Sex Ed, Stuck in Love, and The Dark Knight Rises feature movies.

He co-starred in Everyone Wants Some as Finnegan!!, the spiritual sequel of Richard Linklater to Dazed & Confused, filmed in Austin and published by Paramount on 30 March 2016. He appeared in Set It Up, a romantic comedy on Netflix, alongside Zoey Deutch.

Currently, he is filming for Top Gun: Maverick which is an American drama set to be released in 2020.

Glen Powell has won two awards which of them are Screen Actors Guild Award for his Outstanding Performance by a Cast in a Motion Pictures. Similarly, he has won Satellite Award for Best Ensemble also by Motion Pictures.

Glen has an estimated net worth of $7 million which he has collected from his whole career. However, his salary per year is not revealed. Furthermore, his source of income comes from debuting from different movies and series.

There was a rumor about him that he would play a role in Top Gun 2 although he admitted that there has been a negotiation about a cool idea. There had not been a decision yet that who will play either Tom Cruise or Glen.

Powell has a decent height of 6 feet and has a weight of about 86kg. Similarly. he has brown hair color with hazel eyes.