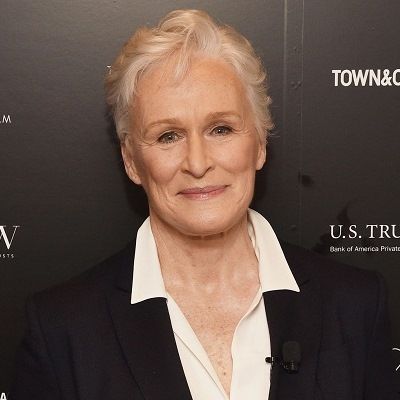 It's gotten out of control. It's taking bigger and bigger names to make smaller and smaller films. I worry that important films without a big name attached won't get made at all.

I love the chemistry that can be created onstage between the actors and the audience. It's molecular even, the energies that can go back and forth. I started in theater. and when I first went into movies I felt that my energy was going to blow out the camera.

I called Stephen Frears, who had directed me in Dangerous Liaisons (1988), and I said, 'C'mon, everyone from Dangerous is in this film, I want a part.' I felt left out. So he gave me the part of a bordello owner, and I thought it would take a week-go to London, have some fun, and come home. But it was hard. They wanted this Liverpudlian accent and Stephen was great, because he kept pushing me to do stuff that I didn't know how to do. The character, I think, was quite interesting. But she's in only three scenes."

Glenn Close is a divorced women

Glenn Close once had a relationship with actor Mark Metcalf.

The pair got married in 1969. She later described her marriage to Cabot as “kind of an arranged marriage”. Their marriage was short-lived and ended in 1971 even before she attended college.

In 1970, Glenn had a brief affair with actor Kevin Kline. They later acted together in The Big Chill (1983).

In 1979, Glenn started a relationship with Canadian actor Len Cariou. However, the pair separated after 4 years in 1983.

In 1984, Glenn married James Marlas after a brief relationship. Unfortunately, this marriage did not last long and they divorced after 3 years of marriage in 1987.

In 1987, Glenn began a relationship with producer John Starke. She had earlier met him while filming The World According to Garp (1982).

The couple shared a long engagement period and never got married, separating in 1999.

In mid-2000s Glenn began a relationship with the executive and venture capitalist David Evans Shaw.

In February 2006, Glenn and David tied the knot in Maine. After almost 9 years of blissful married life, the couple got divorced in August 2015.

Who is Glenn Close?

Glenn is an American actress, singer, and producer.

Likely, she is the recipient of numerous accolades, including three Primetime Emmy Awards, three Tony Awards, and three Golden Globe Awards. A seven-time Academy Award nominee, she holds the record as the actress to have the most nominations without a win.

In the year 2016, Close was inducted into the American Theater Hall of Fame, and in 2019, Time magazine named her one of the 100 most influential people in the world.

Glenn Close was born on 19th March 1947 in Greenwich, Connecticut, the United States.

Her parents joined a cult group, the Moral Re-Armament (MRA) when she was seven years old.

The group sent its members all over the world to convert people and her family moved to Congo when she was 13.

Talking about Glenn’s education history, she attended Rosemary Hall preparatory school in Greenwich and joined an MRA singing group called ‘Up With People’ with whom she extensively traveled all over Europe and the U.S.

She broke off from MRA and enrolled in the College of William and Mary where she studied drama and theatre.

She developed her acting skills in the college’s theatre department.

Talking about her profession, she began her acting career with the Broadway play, ‘Love for Love’ in 1974.

Initially, she loved doing theatre so much that she did not think about going into movies, which she eventually did.

She made her Hollywood debut in 1982 with the comedy-drama ‘The World According to Garp’.

In the year 1987, she was offered the role of Alex Forrest in ‘Fatal Attraction’ which was to become the first of the highly unconventional roles she often portrays.

The highly acclaimed ‘Dangerous Liaisons’ followed in 1988 which established her talent for playing on-screen vamps.

Her most memorable role was as Cruella De Vil, the evil fashionista in ‘101 Dalmatians’ in 1996.

Besides that, her television career in the decade was also very impressive.

She appeared in ‘The Lion in Winter in 2004 and played the role of Patty Hewes in the highly successful series ‘Damages’ which ran for five seasons from 2007 to 2012. Her role as the violent and mentally disturbed ex-lover in ‘Fatal Attraction’ (1987).

Moreover, her portrayal of the manipulative Marquise de Merteuil in the 1988 drama film ‘Dangerous Liaisons’ was critically acclaimed.

Likewise, she also played the role of Cruella De Vil in ‘101 Dalmatians’ in 1996 which was well-loved by the audiences. Eventually, she played a brilliant but unethical lawyer who would go to any lengths to get what she wanted.

She won The National Board of Review Award for Best Supporting Actress in 1982 for her role as Jenny Fields in her debut film ‘The World According to Garp’.

She has presented the German Golden Camera award for Best International Actress in 1988 for her role as Marquise Isabelle de Merteuil in ‘Dangerous Liaisons.

She was the recipient of The Golden Globe Award for Best Actress – Miniseries or Television Film in 2004 for her role as Queen Eleanor in ‘The Lion in Winter.

She won The Golden Globe Award for Best Actress–Television Series Drama for her role as Patty Hewes in the legal thriller series ‘Damages’ in 2007.
She also won the Primetime Emmy Award for Outstanding Lead Actress–Drama Series for the same role in 2007-08.

Her most commercially successful project to date has been the 2014 action film Guardians of the Galaxy, which brought in $330,000,000 at the box office.

She is a successful actress. She is currently away from any rumors and controversies.

Glenn has a height of 5 feet 6 inches. Additionally, she weighs is 58Kg. Glenn’s hair color is blonde and her eye color is green.