(owner and manager of Romford) 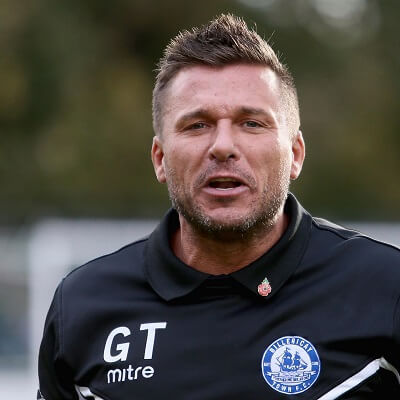 Glenn Tamplin is a married man. He married Bliss Tamplin in 2015. The couple together has three children.

In 2018, Glenn had mysteriously visited model Elizabeth-Jayne Tierney at home. She was the fiancee of player Jamie O’Hara. This news immediately spread and his wife Bliss was upset about it. So, Glenn took his wife on a no-expense-spared holiday to repair their marriage.

Glenn also has other three children from his ex-wife. He hasn’t revealed anything about his previous relationship yet. He lives in Essex, the UK with his six children and wife in his $16 million mansion.

Who is Glenn Tamplin?

Glenn Tamplin is an English businessman who is famous as the current owner and manager of the football club Romford. He is also famous for his time at Billericay Town where he was the co-owner, director and manager.

In 2017, he earned the 2nd spot in the Essex Power 100 list and became the second most powerful person in Essex. Furthermore, he is also the owner of AGP Steel.

Glenn Tamplin was born in January 1972 in Dagenham to English ancestry. His current age is 48. He grew up in Dagenham with his mother and stepfather. He lost his little sister when she was 3 years old. She died of sudden infant death syndrome.

Tamplin was a football player since his childhood days. At the age of eleven, he was already playing district and country football. He also played for the academics of Leyton Orient and West Ham United.

There is no information about his education status yet.

Regarding his career, he was a football player at the age of eleven. He was playing for distinct and country football and also represented the academics of Leyton Orient and West Ham United. He then continued playing district and country football, but he did not play professionally. However, he played semi-professionally for the Barkingside football club. At the same time, he also used to work for Rainham Steel.

In December 2016, he purchased team Billericay Town which was a non-league football team. For the improvements and a new pitch for the club, Tamplin invested over £2,000,000. He assumed the manager’s position at the club and was able to guide the team of the first round of the 2017-2018 FA Cup.

However, on 24th February 2018, the club faced three straight league defeats to Leiston, Folkestone Invicta, and Wealdstone. Being the manager of the team, he sacked himself and was on a disagreement with the players after asking them to give up a week’s wages following the poor run. On 4th April, he announced through YouTube that he was again resigning from his post as the manager. And on 2nd September, he revealed on the official website of the Billericay Town that the club was for sale.

Tamplin bought another football club named Romford in November 2019. He replaced Paul Martin who was the manager of the club.

Being a football club owner and manager, Tamplin has a net worth of around $45 million. He also earns an impressive amount of money through AGP Steel. However, his exact salary is still unknown.

Furthermore, he lives in a standard $18 million worth massive mansion having various facilities like a golf course, 4G football pitches, both indoor and outdoor swimming pools, gymnasium and many more. Likewise, he also has a $1 million worth Ferrari F12 TDF.

Tamplin became a part of a controversy in September of 2016 when Manns Waste Management Limited illegally dumped more than 6,000 tonnes of controlled waste on the grounds of his home and he was fined a total of £45,000 and ordered to pay £30,789 in court costs. The court termed the case as ‘negligently to a high degree’ in committing the offenses.

He has brown hair with black eyes. However, his other physical measurements such as his height and weight are unknown. Likewise, there is no information about his shoe size.

You may also like to know the detail information about the Bio, Age, Career, Net worth, Relationship of Nick Cokas, Matthew Noszka, Valerie Singleton, and Josh Gracin