Best known after appearing in the documentary, adventure show, Life Below Zero.

Currently, Glenn Villeneuve is in a relationship with Trisha Kazan.

Together, they have a daughter, Agatha, born in June 2017.

Previously, he was married to Siliva Daeumichen in 2001.

They welcomed their first child, Willow in May 2006.

They divorced in 2013. After that Silvia and their children went to live in Fairbanks. 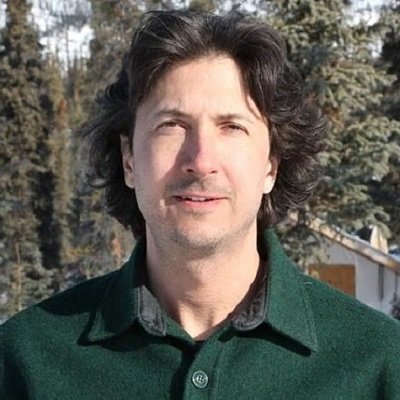 Who is Glenn Villeneuve?

Glenna Villeneuve is a TV personality, hunter, and fisherman.

He is best known for appearing in the documentary, adventure show, Life Below Zero.

Glenn Villeneuve was born in Burlington, Vermont USA, on March 18, 1969. He liked spending time in forests and mountains.

Because of his profession, he left high school after one year.

In 1999 he moved to Alaska and stayed in the town of Chandalar. When he explored Alaska and settled there. He began hunting, living off sheep, moose, and caribou meat in order to live or survive. His living life and survival skill were seen by the BBC Worldwide producer.

However, Glenn denied appearing in the show as he had no experience in doing any reality show. Later, he agreed to be part of the show. Glenn is a self-made man.

Then BBC producer produced a documentary series, Life Below Zero. They choose Villeneuve as the main leading actor in this series.

Life Below Zero is a documentary, adventure, and reality-tv series that premiered on May 19, 2013.

Glenn appeared in more than 75 episodes of this series. He is the most famous, idol character and most popular among people across the world. He played alongside Sue Aikens, Chip and Agnes Hailstone, and Andy Bassich. They are also lead characters and members of this show. He made this show popular so, it is still going strong till now.

He does not have any real jobs other than this show Life Below Zero. So he earned around $200 k annual income because of his popularity.

Glenn is a brown-eyed brunette. His height is 6 feet 5 inches and weighs 65 kg.

He has followers of about 27.3k on Instagram with the username glennvilleneuve.