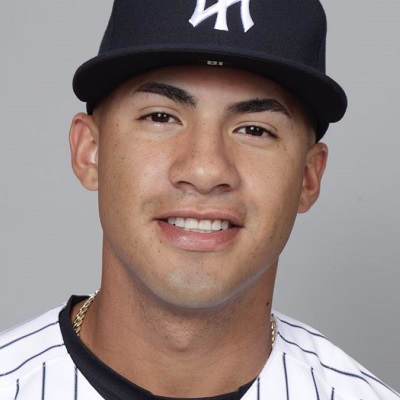 Gleyber Torres is a married person. He married his longtime girlfriend Elizabeth on April 1, 2017. They had met in his hometown of Caracas in 2014. He and wife are yet to welcome children. As of 2019, the couple seems to be living happily without rumors of extra-marital affairs or divorce.

Who is Gleyber Torres?

Gleyber Torres is a Venezuelan baseball player and he is a second baseman and shortstop for the New York Yankees of Major League Baseball, having played for Chicago Cubs in the minor leagues.

He on December 13, 1996, in Caracas, Venezuela. He was born as Gleyber David Castro Torres to father Eusebio Torres and mother Ibelise Castro.

Gleyber has a sibling, a sister. The family faced food shortages, rampant crime, and widespread violence as the family grew up in a middle-class household and in a politically unstable country. He began playing baseball at the age of four as a center fielder, catcher, pitcher, and eventually shortstop.

He moved to Maracay at the age of 14 and enrolled in an academy that had contacts with MLB scouts.

Torres holds Venezuelan citizenship but his ethnicity is unknown.

He signed a contract with Chicago Cubs after they sought him out. The contract, which he signed in 2012, made him an international free agent for a $1.7 million signing bonus. His debut in minor leagues was in 2014 with Arizona Cubs of the Rookie-level Arizona League.

In addition, he debuted his MBL on April 22, 2018, against Toronto Blue Jays. He became the youngest Yankee to homer, at the age of 21. With the team, he has played against Cleveland Indians, Texas Rangers, Houston Astros, among others.

His net worth is yet to be officially estimated and will soon be updated. His current salary with the New York Yankees is $605,200.

He has a height of 6 ft. 1 inch and weighs 79 kg. Torres has dark brown eyes and black hair. But, his shoe size, dress size, etc. are not available.