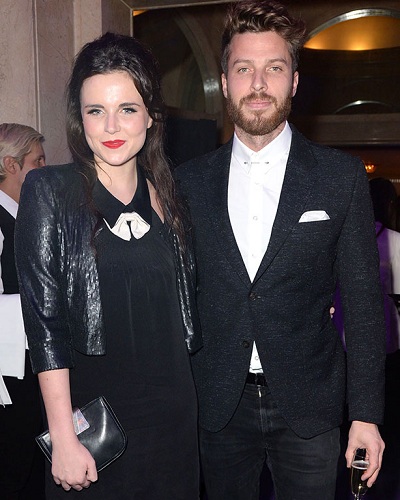 Love feeling is something unique and adorable. When you fall in love, you think that your partner is your everything and you think that what you doing is right. You feel the happiness worldwide can be fulfilled to you by your partner.

And it is the cause that the lovebirds take their relationship to the next level. And Marriage is that thing when couples exchange vows promising that they would support each other in every pain and happiness.

Today, Let’s have a glimpse of Rick Edward’s marriage ceremony!!!

As Rick was one of the secretive people, he wanted to keep his dating life a secret but after his longtime 5 years of relationship with EastEnders actress Emer Kenny, he married the same lady.

The couples exchange the vows promising to support each other in every pain and sorrow, they married in lavish style at Kew Garden in May 2016.

Despite being a secretive person, he could not control himself from sharing the pics of their wedding ceremony, and No doubt, they were just slaying in their perfect wedding dresses.

In one of the pics which he shared on Instagram, he wrote:

Their marriage ceremony was just a blast. With full of energy and enjoyment, with friends, families, and relatives surrounding them, they got marry and after marriage, couples do not seem that they are publicizing their honeymoon as both are having very busy schedules and that might be the cause, they are putting their honeymoon aside and focusing on their career.

Similarly, blooming their career, an actress is back to her television whereas her husband joined him. Similarly, they are celebrating their first anniversary when a 38-year-old TV presenter wished his wife an anniversary by writing:

“UNLUCKY GUYS,I MARRIED THE BEST ONE.”

Similarly, his wife also wished him an anniversary as a reply where she wrote:

Moreover, after the year of their marriage, couples now started to think of expanding the family and having kids. Where Rick wrote:

“I WILL CALL ALL OF MY CHILDREN GREG IF YOU PULL THIS OUT #Longjump #Rio2016.”

And this is as one of the hints for giving birth to the child as soon as possible.

NO BIG DEAL GUYS (regram from my don @christophergove)

UNLUCKY GUYS, I MARRIED THE BEST ONE

London-born Rick was born as Richard Philip “Rick” Edwards on May 20, 1979. He is a British citizen and is active in this field since 1999. He is a popular TV presenter. Rick presents several shows including sports shows on TV. Additionally, he is also a commentator. He works for Channel 4, E4, and ITV2.

Darby Stanchfield took six years to reveal on her marital life. All this time her husband was a secret affair
Tags : Actress TV Presenter