GlitterForever17 is straight and is married to her longtime boyfriend named Slava Avdeev. After some years of dating, she announced her engagement in early 2016 through a youtube video titled ‘I’m Officially Engaged!’. On July 17, 2017, they officially tied the knot in the presence of their family and close friends.

Currently, the couple seems happy and enjoying their days together. They are appreciated by her fans whom she calls Glitter Critters. 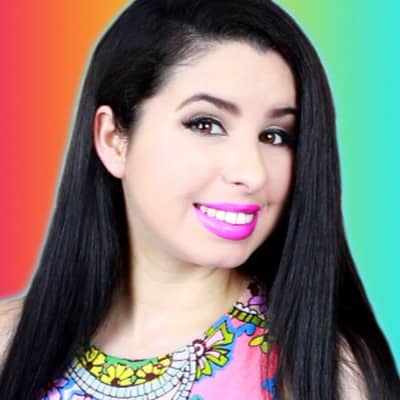 GlitterForever17 is an American YouTuber, Fashion Model, and Social Media Star. She is popular as a promotional influencer who often posts videos of a collection of Hair Makeovers, Makeup videos, Interesting Vlogs, and other quirky DIYs. She is an accomplished Youtuber with over 3.12M subscribers.

GlitterForever17 was born to mother Romona in Spanish Lake Swamp, Louisiana, the USA on October 18, 1987. As of 2022, she will celebrate her 35th birthday.

Her father’s name is not mentioned by her and her mother is Romona. Likewise, she was raised and brought up with her mother. In one of her youtube videos titled “Talking About My “Dad” & Eating Burger King Breakfast”, she has mentioned that she doesn’t miss her dad and her dad was not much around her when she needed him the most. She has one half-sibling, named Teresa.

She is of American nationality and follows the Christian religion. Her birth sign is Libra. Furthermore, there is not much information about her schooling and college life. However, she must be a graduate.

GlitterForever17 is mainly a Youtube content creator. She launched her Youtube channel on May 21, 2011, and has made her career from it. Her channel is famous for its content on Hair Makeovers, Makeup videos, Interesting Vlogs, and other quirky DIYs. She posted her first video in 2011 titled “My Hair Makeover: Caramel Highlights & Layered Haircut” and gained huge attention from it in a short amount of time. Inspired by it, she continued to upload more videos day by day.

In a matter of time, she became popular by the name GlitterForever17 among her fans whom she calls Glitter Critters. Uploading daily videos, she became a success to add more subscribers to her youtube channel day by day. She is most popular for her DIY videos. She holds over 3.12M loyal subscribers on her ‘GlitterForever17‘ YouTube channel. Likewise, she has sponsorship deals from various companies and brands like L’Oreal, Bop & Tigerbeat Magazine, Splat Hair Dye, Coastal Scents, and rue21. Moreover, she worked at her local mall before becoming a member of the Seventeen Social Club for Seventeen Magazine.

Her videos have gained outstanding publicity. Her overall videos have succeeded to attract the attention of more than 430 million people. As of 2021, she has uploaded several videos of Hair Makeovers, Makeup videos, Interesting Vlogs, and other quirky DIYs. Some of the popular videos include ‘DIY Pregnant Barbie Doll Costume | Knocked Up Barbie | How To Make Barbie Pregnant | Fetus Barbie!’, and ‘Getting Permanent Makeup: Before & After!’, and ‘DIY Edible iPhone Cases! | EAT Your Phone Case! | How To Make The FIRST Eatable Phone Case!’. Up until now, she has around 3.12M subscribers and 437,446,547 views on her youtube channel.

Of all her Youtube videos and Social media posts, she makes a decent sum of money for her living, and why not she has a net worth of around $3M. Her earnings are influenced by her youtube channel in which she has gathered around 3.12M Subscribers.

Moreover, she has deals and worked with numerous brands including, L’Oreal, Bop & Tigerbeat Magazine, Splat Hair Dye, Coastal Scents, and rue21 which helps her with extra earnings.

Talking about her awards and accolades, She stood in the top 30 at the 2012 NYX Face awards.

There are no rumors or controversies about her. It seems like she is more focused on her career than stuck in controversies and rumors. Likewise, she intends to keep her profile low at the moment.

GlitterForever17 has a decent height of 5 feet 7 inches with a dashing personality. She weighs approximately 64 kg. similarly, her eyes are dark brown, and her hair is brown. Her chest size, waist size, and hip size are 34-26-35 inches respectively. She has a bra cup size of 33 C.