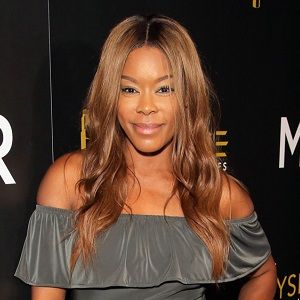 The 47-year-old American actress, Golden is an unmarried woman. Previously, she was in a longterm relationship with her boyfriend D.B. Woodside. The couple started dating in 2008 and continued their relationship. Furthermore, they also welcomed a baby daughter, Dakota Jao.

Although, the couple couldn’t carry their relationship for so long and broke up in 2010. After breaking up with him, Golden started going out with another man. Although, the name of her boyfriend is still unknown. Currently, she is enjoying her love life along with her boyfriend and daughter.

Who is Golden Brooks?

Golden Brooks is an American actress as well as a trained dancer. She rose to fame after appearing in the TV series Girlfriends in 2000. Furthermore, she has also appeared in a couple of hit films such as The Inheritance, Beauty Shop, A Beautiful Soul, and few more. Additionally, she has also gotten NAACP Image Award for Outstanding Actress in a Comedy Series nominations twice.

Golden was born on December 1, 1970, in Fresno, California, USA. Her father’s name is Walter Brooks and her mother’s name is Barbara Brooks. Talking about her nationality, she is American and her ethnicity is African-American. As a child, she had a keen interest in skating and also won several trophies at her early age.

Moving towards her education, she completed her graduation from UC Berkeley. Later, she gained her Master’s degree from Sarah Lawrence College.

Golden began her acting career from the 1993 TV series The Adventures of Pete & Pete followed by Promise Land and Linc’s. In 2000, she also appeared in the hit TV series The Jamie Foxx Show and The Parkers. Furthermore, Golden has also starred as Rachel Landry in Haunted and Alicia Travers in Star Trek: Enterprise. Back in 2008, the American actress has also acted in the 2000 TV series Girlfriends in which she played till 2008 as well as in CSI: Miami.

Besides this, she made her film debut from the 1997 film called ‘Drive-by A Love Story’. Moreover, she got huge recognition for her role in the film Beauty Shop. In 2012, she appeared on the TV series Hart of Dixie alongside Rachel Bilson. Furthermore, she has also starred in a couple of hit films such as The Inheritance, Beauty Shop, A Beautiful Soul, and a few more. In addition, her recent ventures include Supermodel, Definitely Divorcing, He Watches Over Me, and a few more.

Being a famous actress, she earns a handsome amount of money from her profession. Currently, she has a net worth of $8 million.

As of now, she has won Grand Jury Prize for The Inheritance and BET Comedy Award for Girlfriends.

Golden has a height of 5 ft 6 inches and her weight is 57kg. Furthermore, she has a pair of beautiful dark brown eyes and black hair. Besides this, there is not any information regarding her other body measurements.