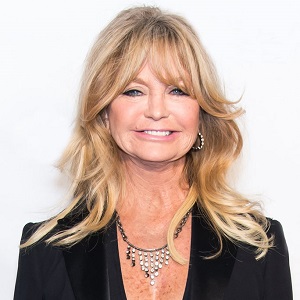 One way to feel good about yourself is to love yourself... to take care of yourself

The only thing that will make you happy is being happy with who you are, and not who people think you are

The ability to remain calm and focused in stressful situations is central to making positive decisions.

Goldie has been married twice till now. But unfortunately, for this beautiful diva, none of them worked out. She was married to dancer-turned-director Gus Trikonis on May 16, 1969.

But it didn’t work out that long. It was pretty clear that Goldie wasn’t happy with the marriage as she was seen dating stuntman Ted Grossman and Swedish actor Bruno Wintzell before even divorcing Gus. Finally, their miserable marriage ended in 1976 legally.

She was married for the second time with musician Bill Hudson whom she met on a flight to Los Angeles. They had 2 children together named Oliver and Kate Hudson before they separated after 8 years of marriage. She divorced Bill in March 1982.

It was less than a year after she got divorced when she got involved emotionally to the legendary actor Kurt Russell on the set of ‘Swing Swift’.

They are not married yet but are living a happy life sharing more than 3 decades of their togetherness. They have a child together named Wyatt Russell.

Who is Goldie Hawn?

DC-born Goldie Hawn is an Academy and Golden Globe winner in a category of supporting actress for her prominent acting in American comedy film ‘Cactus Flower’ made her name unforgettable in the Hollywood. American actress, director, producer and occasional singer are some of the titles she is best known for.

Often known as a bankable actor for more than 25 years, beautiful and elegant actress Goldie gained her fame on television after being cast in series ‘Rowan & Martin’s Laugh-In’.

Goldie was born on 21 November 1945, in Washington, D.C., United States. Her ethnicity is of German and English descent. Her nationality is American.

Her full name is Goldie Jeanne Hawn. Goldie was born to father Edward Rutledge and Jewish mother Laura. Her father was a band musician while her mother was a jewelry shop owner.

She grew up in a family of the Jewish faith. She had an interest in dancing from a young age. Additionally, she took tap and ballet dance lessons.

Goldie’s love and interest towards various forms of dancing from early childhood boosted her dancing career. She then worked as a professional dancer until she changed her profession to acting.

Afterward, she started her acting career playing in sitcoms. She got her major role in American sketch comedy TV program ‘Rowan & Martin’s Laugh-In’. It helped her raise her career in the acting industry.

She debuted in the feature film in ‘The One and Only, Genuine, Original Family Band’. But it was ‘Cactus Flower’ which gave her fame as the movie stars. She also won Academy Award and Golden Globe award for best actress in 1969 for her outstanding performance in the film.

Furthermore, she did a lot of movies and TV series although she hasn’t been in any movies since 2002 and is all set to star in 2017 movie ‘Snatched’.

Goldie Hawn: Salary and Net Worth

Presently, she earns a massive salary and has a net worth of $60 million.

She was criticized by some fans over dating Ted and Bruno before even divorcing Gus Trikonis. Presently, there are no rumors that surround her personal with professional life.

Goldie weighs around 59 kg or 130 pounds. Similarly, she stands tall at a height of 5 feet 6 inches. Additionally, she has a figure of 34-24-36 inches. She has golden brown hair color and blue eye color.