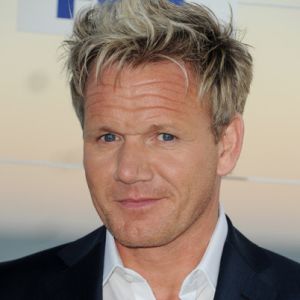 I don't like looking back. I'm always constantly looking forward. I'm not the one to sort of sit and cry over spilt milk. I'm too busy looking for the next cow

If you want to become a great chef, you have to work with great chefs. And that's exactly what I did

The minute you start compromising for the sake of massaging somebody's ego, that's it, game over.

What is the relationship of Gordon Ramsay?

The couple has four children: Megan, Holly, Jack, Matilda, and Oscar. On 13 May 2016, it was announced that the couple was expecting their fifth child, a boy.

However, a month later, it was revealed that Tana suffered a miscarriage at five months and lost her boy, Rocky.

In 2014, the couple established the Gordon and Tana Ramsay Foundation to help support the Great Ormond Street Hospital Children’s Charity.

There are no disputes between the couples they live their marriage life very happily.

Who is Gordon Ramsay?

He is a judge of the cooking show Masterchef, Hell’s Kitchen, The F Word, Ramsay’s Kitchen Nightmares, etc.

Gordon Ramsay was born on November 8, 1966, in Johnstone, Renfrewshire, Scotland, UK. His nationality is British and his ethnicity is mixed(Scottish and Irish).

His birth name is Gordon James Ramsay. From the age of five, he was raised in Stratford-upon-Avon. Ramsay is the second of four children. He has two sisters: Yvonne Ramsay and Diane Ramsay.

Diane; a younger brother, Ronnie, who Ramsay revealed had been imprisoned for heroin possession as a juvenile, and a younger sister, Yvonne.

Ramsay’s father’s name was Gordon James Senior. His dad passed away in the year 1997.

He was a swimming pool manager, a welder, and a shopkeeper. His mother’s name is Helen and she was a nurse. His sister Yvonne is also a nurse.

Ramsay returned to school, earning a degree in hotel management in 1987. He also attended Activate Learning.

Ramsay’s first love was soccer he set his sights on a professional sports career. At the age of 15, the talented Ramsay joined the Glasgow Rangers, a pro club.

Ramsay’s time with the team spanned three years, until 1985 when a knee injury prematurely ended his career in football.

Ramsay’s Top Chef and Entrepreneur career, After finishing his studies, Gordan Ramsay placed himself under the direction of some of Europe’s top chefs.

He apprenticed with Marco Pierre White at Harvey’s in London, worked for Albert Roux at Le Gavroche, and then worked under master chefs Joel Robuchon and Guy Savoy in France.

In 1993, Ramsay struck out on his own as head chef of the newly opened Aubergine in London where, over the course of three years, he earned the restaurant a two-star rating from Michelin.

More personal prestige followed in 1995 when Ramsay was awarded Newcomer of the year at the prestigious Catey Awards, an Oscars-like event for the restaurant and hotel business.

When the restaurant’s financial backing became shaky, Ramsay left Aubergine and opened his own establishment, Restaurant Gordon Ramsay, in 1988 in London.

Hailed as a destination for high-end foodies the restaurant eventually received a three-star rating from Michelin.

The next several years proved to be a whirlwind for the ambitious, hard-driving, and temperamental Ramsay. He opened several new restaurants, including Petrus and second Ramsay in London, and eventually Verre in Dubai.

Gordon Ramsay was named chef of the year at the 2000 Catey Awards and Independent Restaurateur of the Year in 2006, Ramsay brought his restaurant business to the U.S. in 2006 with the opening of two establishments at The London NYC.

The celebrity chef has since expanded his reach around the globe, fellow-upbringing his brand to such countries as South Africa, Australia, and Canada.

Gordon Ramsay Television Star, Gordon Ramsay’s migration to television began in 1996 with his appearances as a judge on the BBC competitive cooking show MasterChef.

Ramsay was tapped to host two programs in the spring of 2004: IN Ramsay’s Kitchen Nightmares, he sought to turn around failing restaurants, and in Hell’s Kitchen, he ran a cooking competition among 10 celebrities, with audiences voting off contestants.

With reality television in full bloom in the U.S., the time was ripe for Ramsay to make his move across the Atlantic. In May 2005, the American version of Hell’s Kitchen, which placed aspiring restaurateurs under the intense eye of the show’s host, debuted on FOX.

Like their British counterparts, American audiences learned to love and hate the abrasive chef as he narrowed the field of participants down to one final winner. Meanwhile, he launched another culinary series back in the U.K., The F Word.

Ramsay’s strong ratings on U.S. screens opened the door for an adaptation of Kitchen Nightmares, which debuted in September 2007.

That, in turn, led to the American productions of MasterChef (2010) and MasterChef Junior (2013), with Ramsay heading the group of judges. In 2012, he added another show to his schedule, a variation of his “save a failing establishment” theme with Hotel Hell.

Ramsay is also active Outside the Kitchen, Along with his work and in his restaurants, Ramsay has written more than 20 books. His various businesses have been consolidated into Gordon Ramsay Holdings Limited.

Honored for his impressive record of achievement, Ramsay was named Officer of the Order of the British Empire in 2006. In 2013, he was inducted into the Culinary Hall of Fame.

Gordon Ramsay earns an impressive amount of fortune through his multiple profession as a British chef, restaurateur, television personality, and writer.

Ramsay has a Net worth of $820 million as of 2022. While doing a reality show, Ramsay charges $60 million per episode.

There have been many rumors and controversies over Gordon Ramsay.

Telly chef Gordon may face channel 4 axe after a controversial shark fishing incident. Insiders say the controversy over him fishing for sharks for 18 months for a show about their extinction could be “the final star”.

There also have been different rumors and controversies in his TV shows Kitchen Nightmares and also in Hell’s Kitchen.

Gordon Ramsay has a good height of 6 feet 2 inches and weighs 82 kg.

He has light brown hair color and his eye color is blue. There is no information about his shoe size.

Gordon Ramsay Is Concerned Is About His Kids! But Ex-Affair Seems To Crumble Down Their Happy Family?