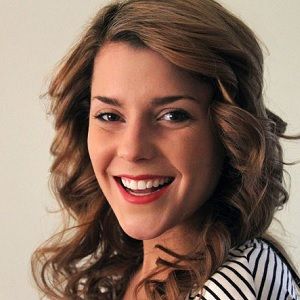 When life gives you lemons, you exchange them at the store for something more edible

Young love is so ridiculous, as is middle-aged and old love. And it’s also hilarious. When have you ever felt so vulnerable and wonderful and terrible at the same time?

Smart people ask for help, because it’s a much more efficient way of doing things than wasting time doing it the wrong way.

Then from 2019, Grace started to date another man. His name is Elliot Morgan who is a comedian and writer.

Who is Grace Helbig?

Grace Helbig is an American YouTube personality. She has also established herself as a professional actress, author, comedian, and producer. Grace is widely famous for her role in movies including, Dirty 30, Camp Takota, Trolls, and Smosh: The Movie.

In addition, she has gained popularity as a creator and host of the YouTube channel it’sGrace. Furthermore, she is the author of the book Grace’s Guide: The Art of Pretending to Be a Grown-up.

Grace Anne Helbig was born on September 27, 1985. The couple John Helbig and Theresa McGinnis gave birth to their only daughter, Grace in Woodbury, New Jersey, U.S. She also has two brothers, Tim and John Helbig.

Talking about her childhood, she was a highly athletic person at a young age. She took part in various track and pole vault competitions. And as of now, she has not shared many of her childhood experiences and memories with us.

At the start of her professional career, Grace Helbig was making her way to the modeling industry. She even participated in the Miss New Jersey USA pageant competition. Furthermore, she was able to reach the semi-finals.

However, she didn’t pursue her modeling career further. She started to share videos on YouTube and was starting to gain fame. This channel has over 2.77 million subscribers.

She has created several YouTube channels including, GracieHinABox, Grace n’ Michelle, Daily Grace, and its grace. And recently, she has started a new series Writing With Grace on her YouTube channel.

On television, she is most popular as the star of The Grace Helbig Show. Some of her major television appearances can be found on The Big Green Help, Michael and Michael Have Issues, All Worked Up, and many others.

Furthermore, she appeared as a guest in the shows including, Nikki & Sara Live, The Morning Show, Last Call with Carson Daly, The Tonight Show Starring Jimmy Fallon, and The Late Late Show With James Corden.

In 2012, she made her first film appearance in the documentary Please Subscribe. Since then, she has appeared in movies including, Camp Takota, Smosh: The Movies, Dirty 30, Trolls and Electra Women, and Dyna Girls.

In addition, she has started to share podcast episodes on SoundCloud and iTunes. The name of her podcast is Not too Deep with Grace Helbig. Furthermore, she has performed and appeared in several award functions and live events.

As regards Grace’s net worth, she has about $6 million worth of wealth under her name. Whereas, her annual income is estimated to be over $1 million.

Furthermore, there was a rumor that she is leaving My Damn Channel. However, it is not yet confirmed.

Grace Helbig has the body of banana shape. Also, she is 5 feet 9 inches tall and weighs about 59 Kg. In addition, she has breast, waist, and hips of sizes 35-25-36 inches.

She wears the shoe of size 9 and the dress of size 6. And, her bra size is 34A. Furthermore, she has brown eyes and blonde hair.