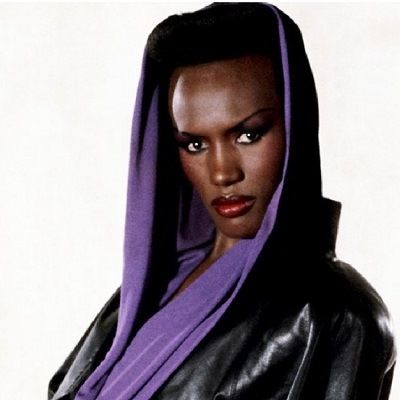 When I perform on stage I become those male bullies, those dominators from my childhood. That's probably why it's so scary because they scared me.

Of course, I find women attractive, I think that if I didn't - I wouldn't find myself attractive. I think one has to begin first within themselves - then go from there, and for me to say that I don't find women attract would be saying that I don't find myself attractive. It doesn't make me anything, I think it is ridiculous trying to categorize people's feelings or to say what one person prefers, there's no comparison. You can't just say one is better than the other, or one is worse than the other - do what you feel, when you feel like it if you feel like it.

Grace Jones first met French illustrator, photographer, and director Jean-Paul Goude in 1977 and sought his advice for the creation of her music videos and album artwork.

Goude was instantly attracted to her androgynous appearance and raw sexuality: the relationship that would extend beyond the boundaries of the New York nightclub.

Their relationship helped bring a new culture and drove Jones to the very center of it. Grace and Jean have a son, Paulo in November 1979.

After that, Swedish martial artist Dolph Lundgren was hired as Grace Jones’s bodyguard in the 80s. Eventually, they started going out and he moved in with her into her New York City apartment.

Jones was also in a relationship with producer Chris Stanley towards the end of the eighties. Jones started dating Danish actor and former strongman competitor Sven-Ole Thorsen in 1990.

Moreover, Jones got married to her bodyguard Atila Altaunbay in 1996. He was from Turkey and Jones’s open lifestyle eventually proved to be too much for him. One day in a fit of jealousy, he placed a knife on her throat and that did it! Jones wasn’t going to take that from anyone, not even her husband.

Their relationship ended at that very moment. However, they aren’t yet officially divorced and are technically still married. The reason is that Jones doesn’t believe in divorce. In some interviews, she has claimed that he is incommunicado.

In 2006, Grace officially started dating music producer, Ivor Guest, the 4th Viscount Wimborne. During the course of their relationship, it was rumored that she was all set to become a lady of the manor. However, they broke up in 2008 after dating for nearly two years.

Who is Grace Jones?

Grace was nominated for the Saturn Awards for Best Supporting Actress for her role ‘Conan the Destroyer’, ‘A View to a Kill’, and ‘Vamp’.

She is well known for her distinctive androgynous appearance and bold features. She appears on the covers of Elle and Vogue among others.

Grace Jones was born  Grace Beverly Jones on May 19, 1948, in Spanish Town, St. Catherine, British Jamaica. She is a Taurus.

Her father is Robert W. Jones, who was a local American politician and Apostolic clergyman, and her mother, Marjorie Jones of Jamaican ancestry, who was a high jumper and even qualified for the Olympics.

However, she dropped out of college halfway to accompany a drama professor.

She signed with the Wilhelmina Modelling agency when she was 18. She worked with international fashion houses like  Yves St. Laurent, Claude Montana, and Kenzo Takada.

When her debut album ‘Portfolio’ was released, it contained her first big hit single, ‘La Vie en rose. Her first album prompted her to release her next album in quick succession, and ‘Fame’ was released in 1978.

She released the album ‘Muse’. The first side of the album contained a continuous medley of four songs and a narrative about someone who has sinned; the second side had disco songs.

Her career, ‘Nightclubbing’ was out in 1981. It had reggae-oriented re-interpretations of the songs by Flash and the Pan, Bill Withers, Iggy Pop, and Astor Piazzolla. It spawned the hits ‘Pull Up to the Bumper’ and ‘I’ve Seen That Face Before (Libertango)’.

She landed her first substantial role as Zula in ‘Conan the Destroyer in 1984. It starred Arnold Schwarzenegger and became an international success.

She appeared as May Day in the James Bond film ‘A View to a Kill’ in 1985. Her album ‘Slave to the Rhythm 1985′ was a concept album with music ranging from funk, R&B, and go-go beats. It was a great commercial success and performed really well in German-speaking countries.

She made her first foray into production with her album ‘Inside Story’ in 1986. She explored several elements of jazz, gospel and Caribbean sounds in the album.

Her album ‘Hurricane’ was out in 2008. It included a number of autobiographical songs including ‘This Is’, ‘William’s Blood’, and ‘Love You to Life’.

She has an estimated net worth of around $7 Million US. Her earnings as an actress are $42,180 US and above.

-Grace Jones has been rumored to have a cameo in the new 007 movies.

-Previously, she also starred in the Roger Moore- era Bond film A View to a Kill 1985 as May Day.

-And one more rumor, she hooked up with Chris Makepeace in 1986 and director Quentin Tarantino in February 2014.