Updated On November 17, 2022 | Published By: Grace
Share this
In Relation 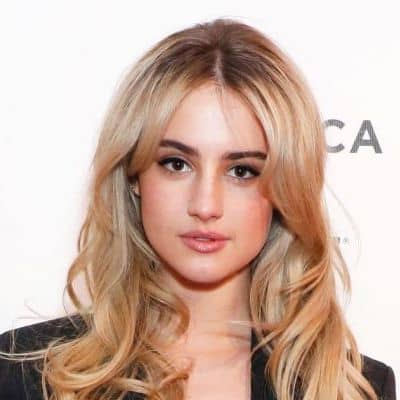 Who is Grace Van Patten is dating?

Their affair started while playing in the series ‘Tell Me Lies.’ They were co-stars.

Who is Grace Van Patten?

Grace Van Patten is an American Actress. Grace is best known for the role of Balloon Girl in Under the Silver Lake (Crime Drama) in 2018, Lilian in Good Posture (Comedy Drama) in 2019, and Ana in Mayday (Mystery Drama) in 2021.

As of 2022, Van Patten made her appearance as Lucy Albright in Tell Me Lies (TV Series).

Grace Van was born on 21st November 1996 in New York City, U.S. She is the older daughter of Timothy Van Patten and Wendy Rossmeyer Van Patten. Her father is an American Director and Producer, meanwhile, her mother is an American Model. Besides that, she has two younger siblings.

Moreover, Patten was cast as Mackenzie in The Wilde Wedding (Comedy Romance) in 2017. In the next year, she was seen as Olivia Meadows in Maniac (TV Mini-Series). In 2020, she made her appearance as Cassie in The Violent Heart (Drama Thriller).

Furthermore, Grace was seen as Zoe Marconi in Nine Perfect Strangers (a TV Mini-Series) in 2021. Currently, she appears in Paltrocast with Darren Paltrowitz (TV Series).

As of now, Van has an estimated net worth of USD 2.34 Million. Besides that, she charged $30000 per episode. In addition, Patten seems to have a lavish life.

Grace is rumored to be dating Jackson White, an American actor. Patten recently admitted that they are seeing each other.

Grace stands at a height of 5 feet 7 inches and a weight of 48 Kg. Concerning her physical appearance, Van has a beautiful pair of black eyes with wavy curly blonde hair. Besides that, her whole body measurements are 32-25-34 inches.