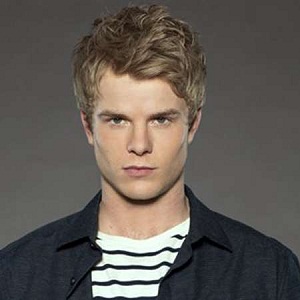 Rogers dated Pretty Little Liars star Lucy Hale, which was revealed by her in an interview with Us Weekly. In July 2013, it was rumored that the couple had ended their relationship after 3 months of dating. He is thus, presumed to be single at the present.

Who is Graham Rogers?

Graham Rogers is an American actor, best known for his roles as Scott Thomas in the comedy film Struck by Lightning, Danny Matheson in NBC’s science fiction series Rev olution, Al Jardine in the biopic Love and Mercy, Carson in the thriller Careful What You Wish For and Tyler Stone on the Hulu original series Resident Advisors.

Currently, he is starring in the role of Caleb Haas in the drama-thriller series Quantico on ABC.

Rogers was born Graham Rogers on December 17, 1990, in West Chester, Pennsylvania, the United States of America. His nationality is American and ethnicity is North American.

Other than his date of birth and place of birth, nothing much information is known to the mainstream media yet. This includes the info on the whereabouts of his parents, siblings, early childhood and teenage days, his educational backgrounds and qualification, etc.

When Rogers was eighteen, he moved to Los Angeles, California, where he began pursuing acting by taking acting classes.

The exact onset of the career of Rogers is not known yet. He is best known for delivering the line, “Can I get a hot tub?” in the popular State Farm Insurance commercial. Rogers also had a guest appearance on one episode of the TNT drama television series Memphis Beat.

In 2012, Rogers played Scott Thomas, a flamboyant member of Clover High’s drama department, in the film Struck by Lightning. The next year, Rogers co-starred as Henry Iris in the film Crazy Kind of Love, which is also known as Long Time Gone.

He then landed a television role as Danny Matheson in the NBC hit drama Revolution, which aired from 2012 to 2013. In April 2013, Rogers started filming a role in the independent thriller film Careful What You Wish For (2015) in Charlotte, North Carolina, starring alongside singer Nick Jonas.

Two months later, Rogers announced on Twitter that he had been cast in an upcoming biographical film about the life of singer-songwriter Brian Wilson of The Beach Boys, titled Love and Mercy (2014). In 2015, he starred in the Hulu comedy series Resident Advisors as Tyler Stone. In the same year, he was also cast in ABC’s thriller series Quantico, portraying FBI recruit Caleb Haas.

On February 21, 2017, it was announced that Rogers was cast in the recurring role of Smitty in the fifth season of the Showtime crime drama series, Ray Donovan.

Apart from that, Rogers has also appeared as himself – the guest in the TV series Good Morning America in 2015.

Graham Rogers: Salary and Net Worth

There are no any much significant rumors and controversies regarding Graham Rogers in the mainstream media till date.

Graham has the height of 6 feet. His body weighs 77kg. He has blonde hair and blue eyes.