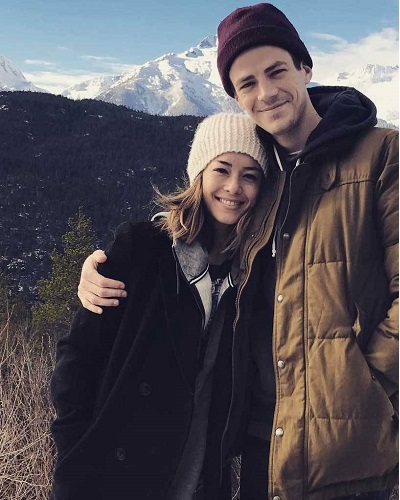 Firstly, Congratulation to the newly engaged couple Grant Gustin and La Thoma for the engagement. The couple finally shared the ring after a long time of dating. Social media is the platform where people share all the things going in their personal life. As in the same way, newly engaged Grant Gustin shared the news of his engagement with his love La Thoma by posting the adorable picture on the Instagram.

Announcement of engagement of Grant Gustin and La Thoma through Instagram

The Flash Star Grant Gustin is certainly in a very happy space after the engagement with the love of his life La Thoma. He announced his engagement with sharing the picture of a couple on the Instagram. The picture didn’t hold any caption rather a marvelous smile of both and an adorable ring in the ring finger of La Thoma.

After the announcement of the engagement certainly, the couple has been bloomed with loads of love and wishes. All the loved and close people to them are showering with all the love, blessing, and good wishes. Similarly, Rothenberg shared a screenshot from the video chat where La is wrapping her arms around Grant flaunting her ring. Aww! So cute, right?

She also captioned the picture saying:

As like after being in a relationship, people get engaged and married. But between all of this scenario, here comes the most important and lovely part and that is a proposal. For a couple, this is a very memorable moment. As like any other couple they also have a story to share about the proposal to share. According to the Entertainment Tonight, One day, Grant took out a question after she moved is home in Venice, California. As from the reports, they both were working on a beach together, suddenly he bent down the knees with the engagement ring in his hand.

I got her this choker. ☺️? Best date for anything, ever.

When you're about to see the @laclippers in some court side seats for the first time ever. With your FIANCÉ. Thanks for thinking of me WB. LETS GO CLIPS!!!

Virginia-born Grant Gustin was born as Thomas Grant Gustin on January 14, 1990. He possesses American nationality. He is a singer and an actor. Additionally, he is also a dancer.

Presently, he is a prominent figure among the media as the star on the CW series “The Flash” and “Arrow”. He portrayed the role of ‘Barry Allen/The Flash’ in the series. Furthermore, he is also famous for his role in Fox musical comedy series, “Glee”. He portrays the role of Sebastian Smythe, who is a student. More bio…

Porsha Williams ‘Can’t Get Past’ drama with Phaedra Parks, hasn’t spoken to her since Explosive Reunion
Tags : Actor dancer Singer