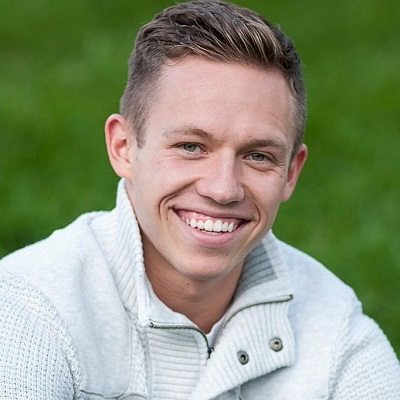 Grant Hochstein is married to Caroline Zhang. His wife, Caroline is also a professional figure skater. The couple got engaged to each other in April 2016. They got engaged at Cherry Hill in Central Park.

Later, the couple got married on the 18th of August 2018. Currently, the couple is leading a happy married life with each other.

Who is Grant Hochstein?

Grant Hochstein was born on the 16th of July 1990 in Warren, Michigan. He is of Germanic ethnicity.

Till date, he has not shared any details on his father, mother, and siblings.

Talking about his educational background, he joined Wayne State University in Detroit. In 2012, he took a break from his studies and took his career forward.

At the age of 9, Grant Hochstein started figure skating. Within no time, he fell in love with sports. Later, in 2009, he started his professional journey as a figure skater with the 2009 U.S. Championships at the junior level. In the competition, he earned a pewter medal being the 3rd runner up.

Moving forward, he competed in ISU Junior Grand Pix in the 2009-2010 season. In the season, he became second in the event that took place in Budapest.

The same year, he competed in the 2010 U.S. Championships and secured 7th position. Also, he was assigned to the 2010 World Junior Championships that took place in The Hague. In the championships, he became 1st in the short program and 7th in the free skate. In the overall event, he secured 5th position.

He also got an invitation to compete at the 2010 Skate Canada International. In the event, he became 10th position. Later, he secured 12th position in 2011 and 2012 U.S Championship.

In 2013-14, he competed in the National championships; U.S Championship and Eastern Section where he came 9th and 1st position respectively.

In the following season, he competed in 5 international championships including World Championships, Four Continents Cup of China, NHK Trophy, and Nebelhorn Trophy. In Cup of China and NKH Trophy, he secured the 4th position.

In season 2016-17, he again competed in the five international competitions. In Nelbelhorn competition, he secured 3rd position i.e his career peak in international events. The year, he became 3rd runner up in the U.S Championship.

On 3rd of August 2018, he took retirement from the figure skating.

Grant Hochstein has brown eyes with brunette hair. His height is 5 feet 5 inches and has a decent weight.

Talking about his appearance, he has an innocent look with a long shaped facial structure. Also, he prefers to be clean-shaven.

As of now, he has managed to maintain his dignity as a sportsperson. Till the date, he has not been through any sort of controversy and scandals that created a buzz in the media.

Apart from that, he has also stayed far from any type of rumors too.

You may also read the bio of Jason Brown, Marina Zoueva, and Valeri Vladimirovich ‘Val’ Bure.