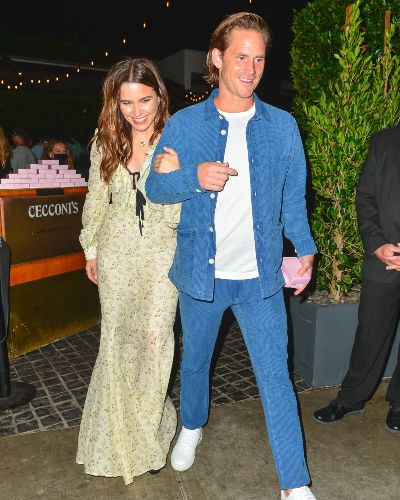 Grant Hughes and Sophia Bush are officially official! The couple seems happy and enjoying their time in Italy. Grant could not keep the engagement news to himself and posted a sentimental post on his Instagram praising his fiance. They announced their engagement on 10th August 2021. Hughes wrote,

“She is my forever Favorite. This is my favorite. And our life is that we’re building because she said “Yes” is already my favorite. I am SO EXCITED to do life with you, my love. And a brilliantly executed surprise like this doesn’t happen without the most incredibly talented secretly stationed photographers,”

“most importantly an amazing family of friends too numerous to name that supported me through this entire process. It all paid off. Thank you for helping me create perfection for the most perfect woman. She felt it,”

He proposed to her on Italy’s Lake Como in a classic wooden speedboat. Sophia wore a brown maxi dress while Grant got down on one knee in a blazer, white t-shirt, and jeans.

Grant Hughes and Sophia Bush were first spotted together in May 2020. In January 2021 Grant had made a post of Sophia as a reflection on the high points of 2020. They do not hesitate to show love for each other on social media.

Who is Grant Hughes?

Grant Hughes is the co-founder of FocusMotion Health which is a company that creates data-driven orthopedic recovery solutions to automatically assess and monitor pre-and post-operative patients, building the deep learning and diagnostic AI that will transform human recovery.

Grant is also an activist and loves to give back. In 2015, he promoted a BuildOn fundraiser to help construct a three-room schoolhouse in Nepal. He also advocated for LGBTQ rights in 2015 when same-sex marriage was made legal in the USA.

Sophia Bush is an American actress, director, spokesperson, and activist. She is mainly popular for starring the role of Brooke Davis in an American television drama series One Tree Hill. Read more bio…