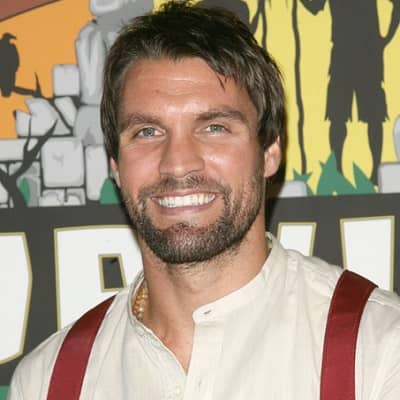 Grant Mattos’ current relationship status is married. He is married to Christina Cox. She is a Canadian actress and stuntwoman.

The couple was married by eloping. They exchanged vows on October 1, 2010, It was only about a week after they returned from Survivor.

Likely, they welcome their first daughter, Flynn Mattos in December 2013.

Who is Grant Mattos?

Furthermore, Grant was also a contestant on Survivor: Redemption Island, the 22nd season of U.S. Survivor.

The actor was born on March 12, 1981, in Mountain View, California, USA. His full name is Grant Logan Mattos.

The information concerning his parents and sibling is unknown. He belongs to American nationality and is of Portuguese ethnicity.

Talking about his education, Mattos went to Saint Francis High School in Mountain View, California. He then attended the University of Southern California after transferring from Foothill College in Los Altos Hills, California. Mattos finished his graduation in the year 2003.

Grant Mattos played football since his college days. He played from the team of Orange Bowl Triumph. After his college, Motto was signed in NFL by the San Diego Chargers in 2003. He played there for two years as a wide receiver and was signed by Denver Broncos in 2005.

Likely after a year, he was signed by Tennessee Titans. He played for it until his retirement. Grant ended his football career due to his injury.

Grant gained more popularity after appearing on Survivor: Redemption Island, the 22nd season of the reality TV show Survivor. He was from the Ometepe tribe and finished it in a tie being in a sixth place.

Apart from being on  Survivor, Mattos is a full-time yoga instructor at City Yoga LA. Grant was ahead Yoga Instructor at Moga Yoga International Los Angeles before he moved from Toronto, Canada. He worked there from mid-2013 until late April 2015. Then moving to New York City in September 2015 he started working at Moda Yoga NYC. Mattos is also a member of Team Gleason.

In 2016 Grant was involved in a fundraising campaign for the Steve Gleason team. It was run to raise awareness and money to help research for the ALS disease, and also medical care for the patient.

Furthermore, Mattos also participated in the 10 km fundraising run in New Orleans on March 26, 2016. There he became second raising $1750. Likely the team collectively raised more than $66,000.

Grant’s net worth is around $1 million.

While Survivor has standard prize money starting from $2,500 for the first one voted out and up to $1 million for the winner. So being part of the show, he must have amassed good earning.

Likely, the annual salary of a yoga instructor also ranges from $72,000. Other information regarding his earning is not available.

Mattos maintains a low profile between the media and doesn’t involve in such activity that can cause rumors or controversies about him.

Talking about her appearance, he has light brown colored hair with beautiful blue eyes.