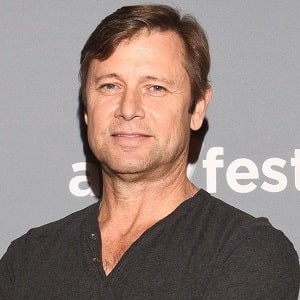 “If you want to be with someone who is 15 or 20 years younger, that's fine, but I've found that if you haven't been knocked down a little bit, then you're probably not going to be hanging with me too much.”

Grant Show is a married man. He is married to his longtime girlfriend, Katherine LaNasa on August 18, 2012. His wife Katherine is an actress, former ballet dancer, and choreographer. They were engaged in July 2012. They welcomed a daughter, Eloise McCue Show, on March 25, 2014.

Previously, he married actress and model Pollyanna McIntosh on July 17, 2004. They first met together for a Lane Bryant ad in 2003. But, they could not hold the relation and divorced in 2011.

Who is Grant Show?

Grant Show is an American actor and he is best known for his role as Jake Hanson in the series ‘Melrose Place’ from 1992 to 1997. He has been portraying tycoon Blake Carrington in the reboot soap opera Dynasty since 2017.

He was born on February 27, 1962, in Detroit, Michigan, U.S. His father’s name is Ed Show and his mother’s name is Kathleen Show. He was given the birth name as Grant Alan Show.

Grant has a sister and her name is Kelly and he does not have any brother. He was raised with his sister in Milpitas, California.

He joined Samuel Ayer High School and studied acting. Later, he graduated from the University of California, Los Angeles where he majored in theatre arts and he was a member of the Alpha Tau Omega fraternity.

Grant first major role was on the daytime soap opera ‘Ryan’s Hope’ in which he played the role of Rick Hyde from 1984-1987. He dated actor Yasmine Bleeth during his time on the soap. Grant went to London in order to improve his craft and returned to the US in the late 1980s.

He made his television appearances as Jake Henson on a few episodes of the popular series ‘Beverly Hills, 90210’ and spun his character as the lead in the next series ‘Melrose Bleeth’. The show did not get positive feedback and it was revamped in the middle of the first season from an episodic straight-laced drama format to a melodramatic soap opera serial format in the tradition of ‘Dynasty’.The show made him the most popular and best-known actors on America television during the 1990s.

He appeared on an episode of ‘Saturday Night Live’ which was hosted by Laura Leighton. Grant along with other member left the show and the show went into a major decline. He regretted later for his decision to leave despite he did not like the scripts during his final season.

He was nominated in 1987 for Daytime Emmy as “Outstanding Young Man in a Daytime Drama Series”.

Grant Show: Net Worth and Salary

It is estimated that he has a net worth of around $71 million and his main source of earning is from his professional career.

There are no any rumor heard about either his professional life or his personal life. He is very secretive about his personal matter.

He has a height of 5 ft. 10 inches. He has dark brown hair and light brown eyes. Other information regarding his weight, dress size, shoe size, etc. are not available.