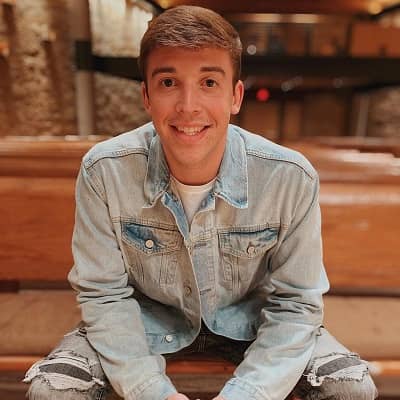 What is the relationship of Grant Troutt?

Grant Troutt is currently engaged to his fiance, Madison Prewett, a reality tv star. The couple started dating each other in January 2022.

Trout proposed to the beautiful reality tv star on one knee in palm beach, Florida. They got engaged on July 31, 2022.

They are sharing each other’s pictures on respective accounts and Grant is soon to marry her.

Who is Grant Troutt?

Grant Troutt is an American basketball player, financial analyst, and celebrity partner most famously known as the son of business tycoon Kenny Troutt.

Troutt helps his father at his business but chose a different path for himself. He gained immediate fame after getting engaged to the reality television star, Madison Prewett.

He was born to his mother, Lisa Troutt, and father, Kenny Troutt. Talking about his parents, his father is a billionaire and the founder of Excel Communications. While his mother was a fashion designer and the founding member of the Council for Lifes and One Hundred Shares.

He has a sister Savannah Troutt, a graduate of the Univerity of Texas, and a brother named Preston Troutt, a strategic partner of CMNWLTH.

Troutt has got American Citizenship.

Grant Troutt: All about his Career

Grant Troutt gave a start to his career as a basketball player. He played basketball for his UC Santa Barbara college team. Grant was active on the team for the 2015-2016 season. He scored his first career points on a three-pointer in the final minutes of UCSB’s Dec. Prior to this, he also played for Episcopal School and averaged 14 points, 1.6 rebounds, a team-leading 7 assists, and 3 steals per game for the team.

However, he was ill and did not make the season-opening road trip with the Gauchos and became an assistant basketball coach for 8 months. After his collegiate days, he started working as an intern at Red Mile. Moreover, he also served as an Analyst Intern at JMI Realty for 2 months. Since 2019, he has been working as a financial analyst at Blue Star Innovation Partners.

He has won several matches for his University Basketball Team but it seems he has not won any awards yet. If any awards or tournaments are won, he has not revealed it to the public.

He has an estimated net worth of over $2 million while his father is worth $1.5 billion.

Grant has never made the headlines for any rumors or controversies yet.

Troutt has an athletic body with a height of 6 feet and 1 inch tall and weighs around 75 kg. He has brown color eyes and dark brown color hair.

Grant is quite active on social media platforms. He has over 30.1k followers on Instagram and few friends on Facebook.