Posted by MarriedBiography Posted on January 29, 2021 | In Divorce , Married , Net Worth
Share this 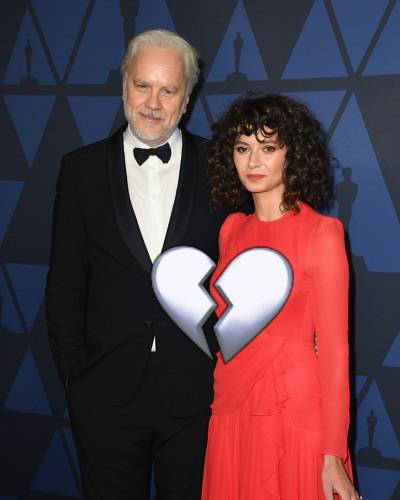 On 26th January 2021, Tim Robbins filed for divorce from Gratiela Brancusi whom he secretly married. The divorce news came as a surprise as his marriage with Gratiela was a secret. It was the first time 62 years old Tim chose someone as his wife as everyone thought he was an unmarried man.

The two were seen together multiple times. They were first linked with each other when he brought her to the premiere of Here and Now in February 2018. Similarly, the couple attended many events like 2019 including a hockey game in December 2019.

Who is Gratiela Brancusi?

Gratiela Brancusi is into the backstage role in the business unlike her husband Tim Robbins. She is more interested in the arts. She was born in Romania and attended school there. In Romania, she worked in PR and event management. At present, she works as the director of marketing and communications for the theater The Actors Gang which belongs to Tim.

She is said to be 30 years younger than her husband Tim Robbins. It is not clear whether she would continue working in the theater or not.

Tim Robbins has two children from his ex-partner Susan Sarandon. He does not have any children with his wife Gratiela. Miles was born on 4th May 1992 and is now 28 years old. Miles is an American musician and actor who has played in films like Dead Man Walking, The Greatest, The Get Down, My Friend Dahmer, Mozart in the Jungle, Blockers, The X-Files, Halloween, and more.

Likewise, his elder son Jack Henry Robbins is a film director born on 15th May 1989. He has directed Serfs Up, VHYes, Alex, FANtasies, Painting with Joan, Opening Night, and many others.

Tim Robbins has a net worth of $71 million as per Celebrity Net Worth. After separating from Susan Sarandon, she paid him $3.2 million for complete ownership of the 6-bedroom house in Chelsea, Manhattan.

Tim has worked in films like Dark Waters, VHYes, Marjorie Prime, A Perfect Day, Welcome to Me, Life of Crime, Thanks for Sharing, Back to 1942, Green Lantern, City of Ember, The Lucky Ones, Noise, War of the Worlds, The Secret Life of Words, and more.

Tim Robbins is an American actor, director, producer, screenwriter, and musician. He is known best for his portrayal of Andy Dufresne in the prison drama film ‘The Shawshank Redemption’. He had been awarded Oscar and SAG award for his role in ‘Mystic River’ in 2003. Read more bio…