Grayson Dolan is an American social media star who is very close to his twin brother, Ethan Dolan. The brothers work on and make the videos together. Grayson is currently single. 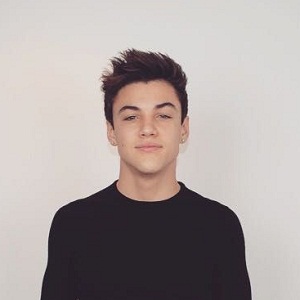 I was on the dock and spotting a very tired drowning duckling that had been separated from her mama and siblings :( I waited to see if her family would return but they never came back.

I swam out to where she was struggling and she let me pick her up so easily because of how tired she was :’( I dried her off, kept her warm, and brought her home where we waited for wildlife rescue to come pick her up.

She was safely transported to a home where many other lost little ducklings now live together :) I also named her Tulip

Talking about the relationship status of Grayson Dolan, he is single.

Prior, he dated a girl named Sofia Olivera. But soon the cute couple broke up.

Who is Grayson Dolan?

He is best known for his posts on Vine and YouTube.

He has over 3.3 million followers on Vine and over 4.75 million on YouTube.

Talking about his childhood he was born on 16 December 1999, in New Jersey, the USA to Sean Dolan and Lisa.

He has a twin brother Ethan who is 20 minutes elder than him. Also, he has an elder sister, Cameron Dolan

Since childhood, he is an energetic person.

There is no information about his education institute but he tweeted that he and his twin brother Ethan officially graduated from high school on 10 July 2017.

He started making Vine videos on 25 May 2013 at the same time as his brother did. They had become quite famous worldwide so the founder of Awesomeness TV signed the twins’ channel in September 2015.

The twins have a strong bond with each other and they left their family to seek a better future. Grayson once won a wrestling tournament at Madison Square Garden alongside his brother.

The twins will be working with Mackenzie Foy who is mostly known the as cute little daughter of Bella and Edward in Twilight in an Upcoming TV series.

Grayson Dolan suffered a controversy when Nate Garner was kicked out from Dolan Twins 4OU Tour. Besides this, there are no rumors regarding him.

The Dolan Twins request their die-hard fans to stay away from their father’s New Jersey funeral! Know the reason why?