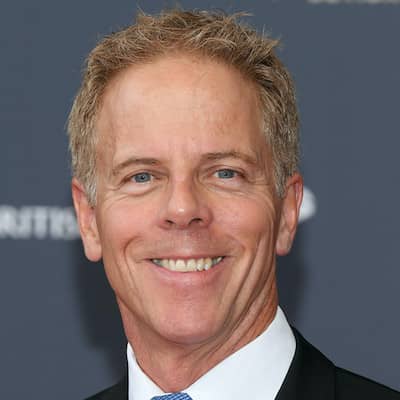 I don't know if I share this with all actors, but acting is hard for me. It's hard for me to have perspective about what I'm doing. I go beyond being self-critical. When we did the pilot for Ally McBeal, I was convinced I was horrible.

Prior to her, he was married to Christine Mourad in the year 1994. Their son, Asa was born in 1997 but this couple separated.

Who is Greg Germann?

Greg Germann is an American actor, director, and writer. He is popular for his acting skills in Ally McBeal, Ned & Stacey, Grey’s Anatomy, and more.

His birthdate is 26 Feb 1958 and he was born in Houston, Texas, United States. The name of his mother was Marlene Marian Germann (homemaker) and his father was Edward A. Germann (professor).

Greg’s ancestry is Caucasian and regarding his academics, he passed out from high school.

Then he enrolled at the University Of Northern Colorado and graduated in 1978.

Greg Germann is a popular face of the entertainment world. His first movie was named Streetwalkin‘ of 1985 where he played the role of Creepy.

Few of his other movies are titled The Night We Never Met, The Last Producer, Bigger Than the Sky, Heart of the Beholder, Answers to Nothing, Quitter, Get Hard, Atlas Shrugged: Who Is John Galt?, Get A Job, Billy Boy, and more.

In addition, Greg is noted in TV series like Grey’s Anatomy as Dr. Thomas Koracick, Ned, and Stacey as Eric ‘Rico’ Moyer, Once Upon a Time as Hades, and Sweet Justice as Andy Del Sarto.

By the recorded reports of 2021, he has accumulated a net worth of around $8 million US. The annual salary from his acting journey is behind the curtain.

This Ally famed actor is keeping himself away from rumors and desperate scandals.

Greg Germann’s height is 5 ft 10 inches and his body weight is average. Moreover, he has blue eyes and his hair is in brown color.