Greg Lauren is a well-recognized American actor, painter, and fashion designer. He is married to Elizabeth Berkley. 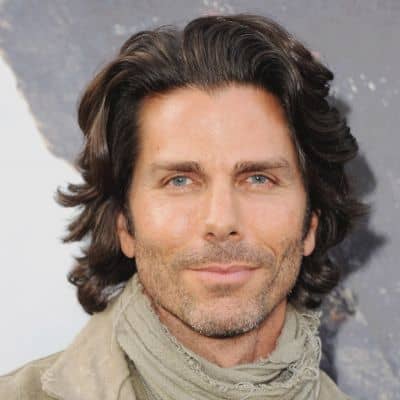 Talking about his relationship details, Greg Lauren is happily living a married life with Elizabeth Berkley who is a well-known American actress, dancer, and author. The couple met for the first time in 2000 and later tied the knot on 1st November 2003.

Their wedding took place at the Esperanza Hotel in Cabo San Lucas, Mexico. Additionally, the couple welcomed their first child as a son named Sky Cole Lauren on 20 July 2012. Presently, they live happily without200 any complications.

Who is Greg Lauren?

Greg Lauren is a well-recognized American actor, painter, and fashion designer. Moreover, Laure is known for his work on Boogie Nights(1997), Batman & Robin(1997), and The Wedding Planner(2001).

Moreover, he is also famous as the nephew of a popular fashion designer, Ralph Lauren.

Greg Lauren was born on 6 January 1970. At present, he is 51 years young star. Likewise, his birthplace is New York City, New York, the USA.

Greg is the son of his father, Jerry Lauren whereas his mother’s details are still unknown. Moreover, he has been secretive towards his sibling’s information in the public.

Talking about his nationality, Lauren holds an American identity whereas his ethnicity is Belarusian-Jewish.

Regarding education, the designer graduated from Princeton University in 1991 with a degree of Bachelor of Arts in History.

Greg is a professional actor, painter, and fashion designer. Initially, he portrayed the role of Brett Nelson on The Young and the Restless and has featured in movies such as Friends and Family, The Wedding Planner, and Boogie Nights.

As a painter, Lauren’s nudes command up to $15,000 and have been sold to celebrities like Renee Zellweger, Demi Moore, Ben Stiller, and Cuba Gooding, Jr. Additionally, he has been covering artists for the DC Comics Vertigo title, Hellblazer issues 215-218 were asked by the publisher. His artwork is also sold at Bespoke Collection.

Moreover, he also inaugurated his fashion brand named after himself with a ready-to-wear collection for men and women.

A famed star, Lauren has earned a handsome amount of money from his profession. He was active in his profession from the year 1994 till the year 2010.

It is reported that Greg Lauren has an estimated net worth of $10million. He lives a luxurious lifestyle along with his family.

Greg has never been part of any controversial matter or rumors till now. The star has been preoccupied with his personal and private life.

It seems that Lauren prefers enjoying his personal life and does not want to merge it with his professional life.

51 years young star, Greg has handsome looks and an admirable personality. He has not stated his exact height but seems to be nearly 6 feet tall.

Furthermore, Lauren has blue eyes whereas his hair is brown.

Regarding his social media presence, Greg Lauren is an active personality on social media. Greg has more than 128k followers on his official Instagram account @greglauren.

He is also available on Twitter with more than 1.3k followers.

Moreover, Lauren is active on Facebook with more than 6k fans and supporters.