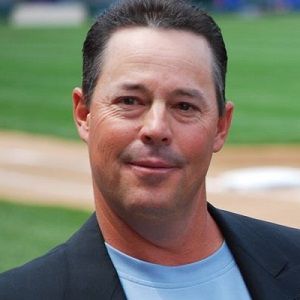 [About Randy Johnson] He's intimidating. He gets guys out before the game even starts. He's scary

guys don't want to face him.

Greg Maddux is a married man. He married Kathy Ronnow on 01 Jan 1989. There is no information about their marriage date. Similarly, it is not known how they first met.

He has two children. One of which is a daughter Amanda “Paige”. She was born on 9th December 1993.

Similarly, he has a son “Satchel” Chase Maddux born on 19th April 1997. there is no news of the divorce of the couple. As of now, they are living happily together.

Who is Greg Maddux?

Greg Maddux is an American former Major League Baseball (MLB) pitcher. He is best known for his accomplishments while playing for the Atlanta Braves and the Chicago Clubs. Similarly, he won the 1995 World Series over Cleveland Indians.

Likewise, he was the first pitcher in major league history to win the Cy Young Award for four consecutive years 1992-1995.

He was born on 14th April 1966 in San Angelo, Texas. He is the son of Dave Maddux and Linda Maddux. Similarly, he spent much of his childhood in Madrid, Spain, where the United States Air Force stationed his father. He has a brother Mike Maddux and a sister Terri Maddux.

Likewise, he belongs to American nationality and his ethnicity is mixed of English and Irish. Talking about his education, he graduated from Valley High School in Las Vegas in 1984.

Greg Maddux played American Legion Baseball with Post 8 in ls Vegas. As he was drafted in 1982. He was the first to achieve a number of feats and records. Similarly, he was the first pitcher in major league history to win the Cy Young Award for four consecutive years (1992–1995), matched by only one other pitcher, Randy Johnson.

During those four seasons, he had a 75–29 record with a 1.98 earned run average (ERA) while allowing less than one baserunner per inning.

Likewise, Greg Maddux is the only pitcher in MLB history to win at least 15 games for 17 straight seasons. Also, he holds the record for most Gold Gloves with 18. He has won more games during the 1990s than any other pitcher and is 8th on the all-time career wins list with 355.

After his retirement as a player, he has also served as a special assistant to the general manager for both the Cubs and Texas Rangers. On January 8, 2014, Maddux was voted into the Baseball Hall of Fame in his first year of eligibility. He received 97.2 percent of the votes.

Talking about his awards, he was the first pitcher in major league history to win the Cy Young Award for four consecutive years. In the year 1996, he won Best Major League Baseball Player ESPY Award.

He has a net worth of $70 million. Similarly, during his career, he earned just under $160 million in salary alone before taxes. He signed a five year deal with Atlanta Braves for $28 million.

In August 1997, he signed a $57.5-million, five-year contract extension that made him the highest-paid player in baseball.

There are no big rumors and controversy about Greg. He is successful in maintaining his life free from rumor.

Greg Maddux has a height of 6 feet and weighs around 88 kg. Similarly, his hair color is salt and pepper and he has black color eyes. There is no information about his other body measurements.