Greg Olsen is a football sportscaster who previously played with Chicago Bears, Carolina Panthers, Seattle Seahawks, and so on. 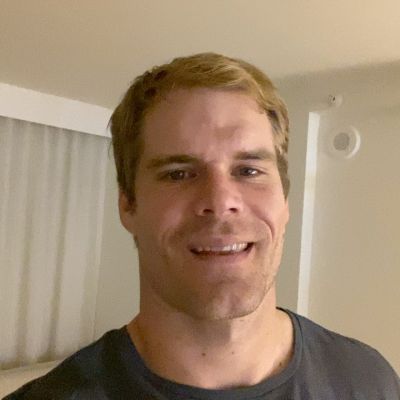 Talking about his love life, Greg is a successful husband as well as a prominent father too. He is joyfully living a married life with his longtime girlfriend, Kara Dooley. The couple met for the first time in university during their college days.

Eventually, the duo tied the knot on 21 March 2009. Their wedding ceremony was planned and designed by Lisa Stoner of E-Events. Similarly, their marriage weekend was organized by The Ginn Hammock Beach Resort where they created the event fun-filled and relaxing activities such as putt-putt golf, brunch, rehearsal dinner, spa, and gentlemen shaves.

Who is Greg Olsen?

Gregory Walter Olsen, popularly known as Greg Olsen is a well-recognized American football sportscaster and past tight end player in the National Football League. Olsen is widely famed as the footballer who played for Chicago Bears, Carolina Panthers, Seattle Seahawks, and so on.

Moreover, he is currently a full-time broadcaster of Fox Sports since 24 January 2021.

Greg Olsen was born on 11 March 1985. At present, his age is 36 years old. Likewise, his birthplace is Paterson, New Jersey, the USA.

Greg is the son of his father, Chris Olsen Sr. whereas his mother is Susan Olsen. Moreover, he has two brothers as well, named Chris Olsen Jr. and Kevin Olsen. Both his brothers are also football players. His dad was a basketball and football coach and also trained Greg.

Talking about his nationality, Olsen holds an American identity whereas his ethnicity is white American.

Regarding education, the prominent athlete studied at Wayne Hills High School. Moreover, he enrolled at the University of Notre Dame but later shifted to the University of Miami in 2003 and majored in criminology.

All-time footballer, Greg played for the Hurricanes’ scout team. However, he suffered a shoulder injuring and was being redshirted. Later, Olsen became the starter of the Miami Hurricanes in his sophomore season in 2005. In his total college career, Greg scored 87 receptions for 1215 yards and six touchdowns.

Professionally, the great footballer began his debut after The Chicago Bears picked him in the first round as the 31st overall pick in the 2007 NFL Draft. Greg made a five-year contract with the team. He debuted on 23 September 2007 against the Dallas Cowboys catching two passes for twenty-eight years. The athlete completed the season with 38 receptions for 391 yards and two touchdowns.

In the second season of the League, Olsen started 7 of 16 games scoring 54 receptions for 574 yards and 5 touchdowns. With his fabulous performance, Chicago’s Comcast SportsNet awarded him as the Bears Player of the Year.

However, his performance dropped in comparison to his 2008 and 2009 seasons. The footballer recorded just 41 receptions for 404 yards and five touchdowns. He helped his team win their first 2011 playoff game on behalf of the Seattle Seahawks.

Greg provided especially valuable to the Panthers in 2015, as a teammate and #1 wide receiver Kelvin Benjamin had an ACL tear and did not play for the entire year. He quit the game with a foot injury against the Buffalo Bills during week2 in the 2017 season.

Likewise, in 2018, Greg extended his contract with the same team worth $17.1 million with a potential max of $20.1 million. He finished with 52 receptions for 597 receiving yards and two receiving touchdowns in the 2019 season. Soon, the Panthers freed Olsen after nine seasons.

The all-time footballer then signed one year contract worth $7 million on 18 February 2020 with the Seattle Seahawks. He made his debut for the new team in Week 1 against the Atlanta Falcons.

Sadly, Greg had to face several injuries time and again. In the end, he was freed from the team on 4 March 2021.

The famous footballer, Olsen announced his retirement from the sports and joined Fox Sports as a full-time broadcaster on 24 January 2021.

It is reported that Greg Olsen has an estimated net worth of $16 million. Similarly, in 2015, he made a three-year deal with the Panthers for $22.5 million.

Further, he also owns The Olsen House in Cushing, Maine.

In the year 2003, the footballer participated in the University of Miami’s rap group. As per different sources, many media taunted him for his involvement in the group. As a result, Greg earned national dishonor for their sexually explicit and vulgar lyrics. Later, the start made an apology for his actions and mentioned he had moved on.

Other than that, Olsen has never been part of any controversial matter or rumors till now.

36 years old personality, Greg Olsen has strong muscles, an athletic body, and an admirable personality. He stands at a height of 6 feet 5 inches. Also, he has a balanced body weight of 116 kg.

Furthermore, Olsen has blue eyes whereas his hair is blonde. His hand size is 10.50 inches whereas his arm length is 10.15 inches.

Regarding his social media presence, Greg Olsen is an active personality on social media. Greg has more than 367k followers on his official Instagram account @gregolsen88.

However, Olsen is not available on Facebook at the moment.