Greg Vanney is a married man. His wife’s name is Amy Vanney. To date, the couple has not shared any details on his wedding, relationship, and dating.

Together, the couple is blessed with four children including a daughter, Kaia, and three sons, twin Dylan, Mason, and Christian.

The 10-year-old twins; Dylan and Mason are interested in football. His son, Mason plays as a defender and midfielder whereas Dylan plays as a Forward. Currently, they are members of TFC Academy and play for the under-12 team.

Also, his 7-year son, Christian is being trained under the training program, TFC Juniors. 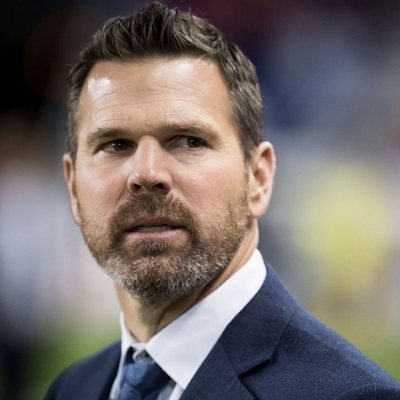 Who is Greg Vanney?

American Greg Vanney is a coach and a former soccer player. He is renowned for his playing style as a defender.

Currently, he happens to be the head coach of Toronto FC.

Greg Vanney was born on the 11th of 1974 in South Boston, Virginia to William F. Vanney and Jeanette Vanney. He is of British-Irish ethnicity.

He has a brother, Jim Vanney. Also, he happens to be a nephew of soccer, Eriq Zavaleta.

Talking about his educational background, he completed his High School at the Marcos de Niza High School in Tempe, Arizona.

After that, in 1992, he attended Florida International University. The following year, he joined the University of California, Los Angeles.

Since High School, he was extremely good at soccer. He happens to be the captain of his High School team. He led the team to a state-level championship the 3 times consecutively starting in 1990.

In the season 1991-1992, he was named the Gatorade Player of the Year, NSCAA, and Parade All-America.

Moving forward, he played for UCLA for three years. In his senior year, he finished the season with 8 goals and 10 assists. The year, he earned All-America Honorable Mention.

In 1996, Greg Vanney started his professional career with the 1996 MLS College Draft. In the draft, the soccer club, Los Angeles Galaxy drafted in its 17th draft. After that, he was sent to the Sacramento Scorpions of USISL as the loan.

For the team, he played three games at the beginning of the year. Among that, he owned two games.

After that, he played for the team, Sacramento Scorpions. On the 21st of December 1996, he made a debut on the United States National Team against Guatemala. Till 2001, he was associated with the team.

In 2001, he got transferred to the French Football Club, SC Bastia. In 2005, he left the club and got signed with FC Dallas. Later, in 2007, Dallas traded him to Colorado.

The same year, he was traded from Colorado to D.C United. Moving forward, On the 15 of February 2008, he moved back to Los Angeles Galaxy once more.

On the 26th of October, he took retirement from his football career.

After retirement, he became the director of the soccer franchise, Real Salt Lake. As the director, he used to oversee program and event development at Grande Sports World.

Moving forward, in January 2011, he became an assistant coach of Chivas USA. On the 31st of August 2014, he became the Major League Soccer coach for the Toronto FC. Since that day, he is the Head Coach of the team.

Greg Vanney has brown eyes with brunette hair. He stands at a height of 5 feet 11 inches and weighs around 77 kg.

To date, he has not been through any sort of controversy and scandal that created a buzz in the media. Apart from that, he has managed to maintain a distance from any type of rumors too.

You may also read the bio of Gabi Butler, Sara Evans, and Paige Milian.