Gregg Popovich is a widow.

He was married to Erin Popovich until her death on April 18, 2018. The couple had two children named Micky and Jill. 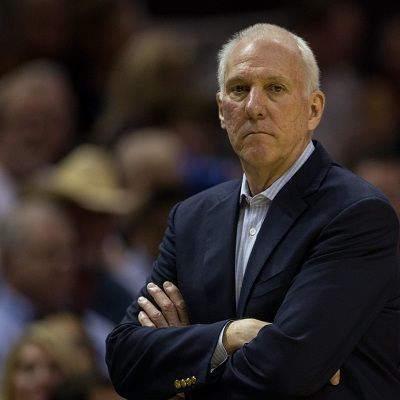 I'm not too interested in talking about the past. It doesn't do us any good whatsoever

If you were born white, you automatically have a monstrous advantage educationally, economically, culturally, and within the society.

Who is Gregg Popovich?

He is the head coach and President of the San Antonio Spurs of the National Basketball Association (NBA), USA national team

Gregg is 71 years old. He was born on January 28, 1949, in East Chicago, Indiana. His father’s name is Raymond who was Serbian and his Mother’s name is Katherine who was Croatian Getty Gregg.

He belongs to American nationality and mixed(Serbian and Croatian) ethnicity. There is no information about his siblings.

He attended Merrillville High School. In 1970, he graduated from the United States Air Force Academy. Gregg graduated in Soviet Studies and underwent Air Force intelligence training with a bachelor’s degree.

Later, he earned a master’s degree in physical education and sports sciences at the University of Denver.

In 1973, Gregg Popovich returned to the Air Force Academy as an assistant coach under head coach Hank Egan. He was named the head basketball coach of Pomona-Pitzer’s men’s team in 1979.

From 1979 to 1988, Popovich coached Pomona-Pitzer men’s basketball, leading the team to its first outright title in 68 years.

Popovich joined Brown as the lead assistant coach for the Spurs following the 1987–88 season. Until 1992, he worked there, when the owner of Spurs, Red McCombs fired the entire coaching staff.

In 1992, he briefly became an assistant to Don Nelson at the Golden State Warriors. Peter Halt purchased San Antonio Spurs and appointed Gregg Popovich as the general manager and Vice President of Basketball Operations in 1994.

Popovich sacked the coach Bob Hill and appointed himself as the coach after a poor start in the 1996-1997 season. Spurs had a tall injuries list and only managed to win 20-62games.

He led the Spurs to win their first NBA title. Feeling comfortable as a coach, Popovich resigned from his position as general manager and was replaced by R.C. Buford in 1999.

In 2002, he abandon his position as general manager to R. C. Buford. Popovich returned to the U.S. Air Force Academy to receive the academy’s award of Distinguished Graduate on April 4, 2008.

Popovich was awarded the Red Auerbach Trophy as he won the NBA Coach of the Year for the third time on April 22, 2014. Moreover, he served as Team Africa’s head coach at the 2015 NBA Africa exhibition game on August 1, 2015.

On April 13, 2019, Popovich has the most wins in NBA history (regular season and playoffs), surpassing Lenny Wilkens and Don Nelson. For the most consecutive winning seasons in NBA history, he has led the Spurs to a winning record in each of his 22 full seasons as head coach, surpassing Phil Jackson.

The Spurs have had a winning record against every other NBA team during his tenure.

Popovich’s annual salary comprises $6 million. He has an estimated net worth of $30 million as of 2022.

He has collected his net worth by providing coaching to several teams, including Pomona- Pitzer, San Antonio Spurs, Air Force, and Golden State Warriors.

There is a controversy that he Defends ‘Very Special’ LeBron James, Rips Laura Ingraham.

He started when James and Kevin Durant discussed social issues and U.S. President Donald Trump on The Undefeated, and Ingraham responded by telling them to “shut up and dribble,” via Scott Gleeson of USA Today.

Gregg Popovich is 6 feet 2 inches tall and he weighs 104 kg.

He has large, attractive, and brown eyes and he has a light hair color. There is no further information about his body measurements.