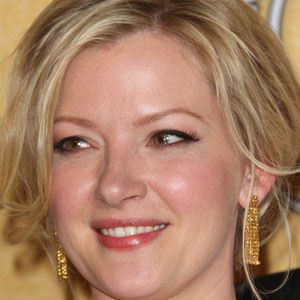 The interesting thing about Bettie Page that I discovered was to leave the mystery. She always retained a little mystery. Let there be some unknowns.

It's not like I have a master plan or anything.

I think because I've maintained my residence in New York, those kinds of films have been more accessible.

Gretchen Mol is a married woman. She has been married to film director Kip Williams since June 1, 2004.

Who is Gretchen Mol?

Gretchen Mol is an American actress and former model who is best known for her role as Gillian Darmody in HBO series ‘Boardwalk Empire’.

Also, she is known for her performances in ‘Rounders’, ‘The Thirteen Floor’, ‘The Notorious Bettie Page’, and many more.

She was born on November 8, 1972, in Deep River, Connecticut, USA. Her mother, Janet is an artist and teacher whereas her father, James was a school teacher at RHAM.

She has a brother named Jim Mol who is a director and editor of the film industry.

Mol holds American citizenship and her ethnicity is a mix of English, French, Irish, Welsh.

She attended high school with a Broadway actor Peter Lockyer and performed in school musicals and plays. Later, she joined The American Musical and Dramatic Academy and then joined the William Esper Studio and graduated from there.

Gretchen Mol began her carer in summer stock theatre in Vermont and appeared in ‘Gospel’ and ‘110 in the Shades’. She portrayed the role of Jenny in Neil LaBute’s ‘The Shape of Things’ in 2001 and portrayed the role of Emily in the Broadway debut of Ayad Akhtar’s play ‘Disgraced’ from 2014 to 2015.

Later, Gretchen Mol was discovered by the photographer David William Powell in 1994 and he photographed her in New York’s Central Park. Similarly, she debuted her film career from Spike Lee’s 1996 film ‘Girl 6’. Then, she appeared in ‘Rounders’, ‘Celebrity’, ‘Vanity Fair’, ‘An American Affair’, ‘Tenure’, and many more.

There was a rumor that she exchanged sexual favors with Harvey Weinstein to further her career. But she denied the rumor.

Gretchen Mol has a height of 5 ft. 6 inches and weighs 58 kg. Also, she has dark brown eyes and blonde hair.

To know more about Marla Sokoloff, Diane Keaton, and Michelle Branch, please click on the link.