Posted by MarriedBiography Posted on April 27, 2021 | In Married , Relationship , Wedding
Share this 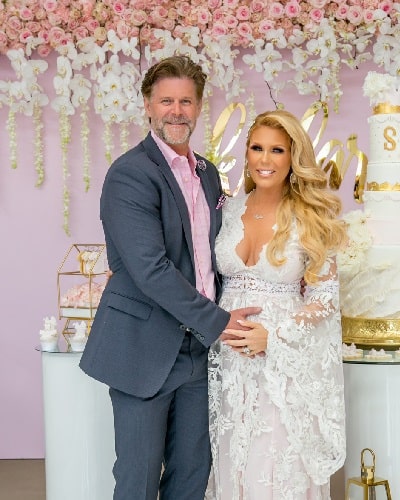 Gretchen Rossi does not have any rush to marry!

But Gretchen is seen flaunting her wedding rings. It was Gretchen who proposed to fiance Slade Smiley in April 2013. From their engagement eight years back they have not given any wedding update plans. She said,

“We got very preoccupied trying to have a baby, obviously, and that’s a very expensive process going through IVF for that many years. It’s interesting because I would love to be married to Slate. I actually call him my husband.”

“I wear a ring like he’s my husband. He wears a ring. We call each other husband and wife. It’s just, we don’t have a legal paper that says it.”

They have been together for almost 12 years and feel like marriage is not everything for them. But Gretchen hopes to have a big celebration with her friends and family one day. She wants to have pictures and a big party. Rossi and Smiley are in a good place now and their relationship is going stronger than ever.

Gretchen Rossi is an American actress. She came into the spotlight after appearing in the Real Housewives of Orange County. Furthermore, she has also appeared in Mia Mundo in 2012 and TMI Hollywood in 2012. Additionally, she has also appeared on Chelsea Handler’s late-night show, Chelsea Lately. Read more bio…