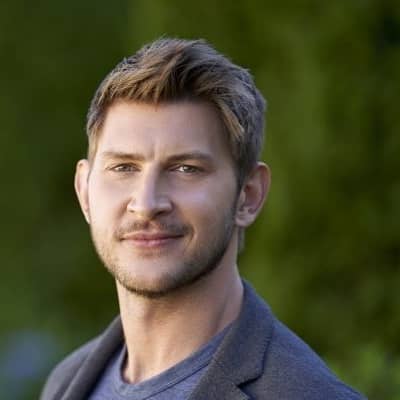 Greyston Holt is not married yet. He is currently dating a fellow actress Cristina Rosato. Rosato is his co-star as well!

Who is Greyston Holt?

Greyston Holt is a Canadian renowned TV actor. He rose to fame after appearing in the television series Durham County as Ray Prager Jr. He also appeared in the Space series Bitten as Clayton Danvers alongside Laura Vandervoort.

Greyston was born on September 30, 1985, as Greyston Stefancsik. He hails from Calgary, Alberta, Canada. His nationality is Canada and belongs to the Hungarian ethnicity.

The name of his parents is Mike Stefancsik (father) and Nancy Stefancsik (mother). His father worked in a store called Windsor Plywood.

He spent his childhood on Salt Spring Island, British Columbia. His parental grandparents are Mike and Edith Stefancsik who immigrated from Hungary in 1957.

After graduation, Greyston moved to Vancouver to pursue an acting career. He made his television debut in the year 2004 as a Long-haired kid in Perfect Romance.

The same year, he starred in the supernatural horror film The Sisterhood as Das. In the following year, he appeared in a guest role in numerous television series such as Into the West (2005), A Girl Like Me: The Gwen Araujo Story (2006), Smalville (2007), Blood Ties (2007), and more.

He got a lead role as Ray Prager Jr. in the crime drama series Durham County which he portrayed from 2007 until 2010. Between the years, he starred in the movies like Lost Boys: The Tribe (2008) and Slap Shot 3: The Junior League (2008). Lately, he has appeared in a teen drama television series Riverdale where he portrayed the role of Glen.

Some of his notable films and television series are,

To date, Holt has managed to maintain a clean profile. He stays miles away from such controversial acts that could hamper his personal and professional life.

As of 2021, the actor has an estimated net worth of $7 million throughout his acting career. His salary and other income are still under review.

The actor stands at the height of 6 feet 2 inches tall and weighs about 95 kg. Likewise, he has brown hair color and gray pair of eyes color.