Griff Jenkins is a Correspondent of Fox News. Apart from his work, he likes Surfing, Runner/Triathlete. Griff is married to his girlfriend since 2000 and the couple has two children. 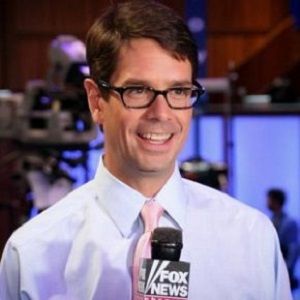 They're going home to parades and barbecues where they're gonna get an earful of 'why can't you just get it done?

Griff Jenkins is married to Kathleen Jenkins since 2000. Although there isn’t any record when they got into a married relationship, they have been blessed with two children. Both his children are daughters: Madeline and Mackenzie.

He does not have any extramarital affairs and there is no sign of their divorce in their married relationship. The couple is living a happy married life in Washington D.C with their children.

Who is Griff Jenkins?

California born Griff Jenkins is an American television as well as a radio personality. He is best known as the producer of the Fox News Channel.

Currently, he is working at Fox News Channel as a Washington-based correspondent.

Born as William Griffin Jenkins in Los Angeles, California on 15 December 1970. He is of English ancestry and has an American nationality.

His father and  mother’s name is not known but he once said in an interview that his mother has told him, “Remember that contentment is not the fulfillment of what you want, but the realization of how much you have.”

For his schooling, he joined Memphis University School in 1989. After graduating from there, he studied at the University of Mississippi in 1993 where he earned a B.A. degree in English.

As soon as his graduation from the university, he did intern for Congressman Don Sundquist. He began his career journey producing Common Sense Radio with Oliver North in 1996 and also served as an associate producer for Oliver North’s War Stories from 2001 to 2003.

He then joined the Fox News Channel (FNC) is a radio producer in 2003. He worked as a producer for the Tony Snow Radio program until Snow accepted the role of White House Press Secretary in 2006.

He has been a recurring guest on a late-night news program ‘Red Eye w/ Greg Gutfeld. He has also occasionally co-hosted Fox & Friends Weekend. On 24 March 2009, he has reported on a Tea Party event in which the protestor was planning to ‘tea bag the fools in D.C.’

While being on FNC, he covered the stories including 2008 and 2012 presidential elections as well as an earthquake in Haiti.

He has a net worth of $1 million but his salary is not revealed yet.

Talking about the rumors and controversy, there was a news that Griff Jenkins was once rumored to be dead. It was hoax news.

Griff has a slim body with a height of 5 feet and 9 inches and weight is not given. Other information on his body measurements like shoe size, chest, etc. is also unknown. He has dark brown hair color and brown eyes.