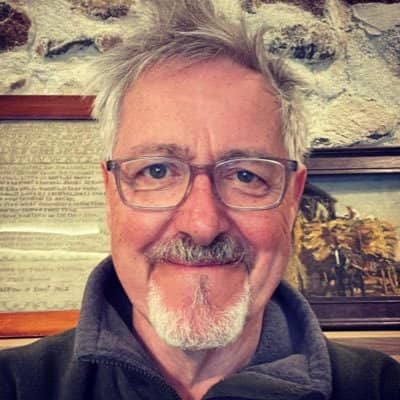 How long Griff Rhys Jones has been married?

Griff Rhys Jones has been married to Jo Jones since 1981. His wife is beautiful and adorable. They met while working at the BBC.

Further, there is not much information on the web to tell more about how their love flourishes. Jon has kept his wedding secret and maintains the privacy of his wife.

Talking about Jo is a graphic designer by profession. They have been blessed with two beautiful children George, an architect, and Catherine, a designer.

However, their birthdate and everything related to them have been kept secret.

As for now, they are enjoying their company, and no news of any divorce, breakup, or split-up has surfaced.

Who is Griff Rhys Jones?

Furthermore, he hosted the BBC television comedy sketch shows Not the Nine O’Clock News and Alas Smith and Jones along with Mel Smith.

He is the son of Gwynneth Margaret and Elwyn Rhys Jones, a medical doctor. His family moved to West Sussex when he was an infant due to his father’s occupation. He grew up in Brentwood, Essex.

Jones has an ethnicity of Welsh and his nationality is British.

He has been the brighter kid at Conifers Primary School in Midhurst, West Sussex. He then joined the junior school in Epping, Essex, followed by Brentwood School in Essex. Griff graduated with a 2:1 from Emmanuel College, Cambridge.

Talking about his career, he is currently the president of Civic Voice, the national organization representing Britain’s civic societies.

He is the author, poet, and famous biographical figure from England and some of his books are To the Baltic with Bob, The Nation’s Favourite Comic Poems, Semi-detached, Head to Head, Insufficiently Welsh, Mountain: Exploring Britain’s High Places, Rivers: One Man and His Dog Paddle Into the Heart of Britain, and Rivers: A Voyage Into the Heart of Britain among others.

For his work in Charley’s Aunt (1984) and An Absolute Turkey (1994), he has won Olivier awards. Furthermore, he has worked for various comedy shows and tv shows as a presenter that includes, including Smack the Pony, Da Ali G Show, I’m Alan Partridge, They Think It’s All Over, QI, Not the Nine O’Clock News, Alas Smith, and Jones, Bookworm, Restoration, Three Men in a Boat, It’ll be Alright on the Night, Greatest Cities of the World and Big Train to name a few.

In the year 2009, he was honored by his father’s former university, the University of Wales College of Medicine.

In his career, he has managed to earn a hefty amount making him worth $70M man. However, he hasn’t divulged his salary.

Jones has always given love and respect for his work. Therefore, he has maintained a clean profile to date.

Talking about his appearance, he stands 5 feet 8 inches and weighs moderately.

Likewise, he has hazel color eyes and black and pepper hair. Further, there is no detail about his body measurement.

Unseen Photos from the Love Island’s Marcel Somerville Wedding! Why only few Islanders showed up?