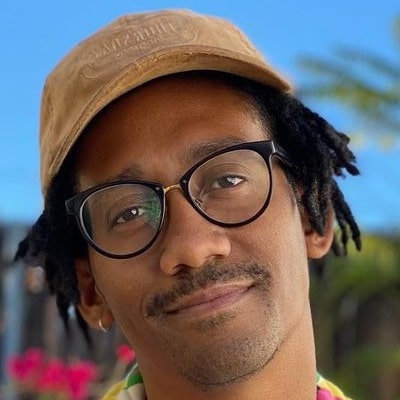 Griffin Matthews is openly gay and a proud member of the LGBTQ community. He is married to Matt Gould who is a composer and writer. The couple gets married in the year 2018.

They are gay parenting they have two sons however, his children’s details information is not available. Similarly, there is not much information available regarding their love life.

Who is Griffin Matthews?

Griffin Matthews is an American actor, writer, and activist. He rose to fame after appearing in the third season of the Netflix series ‘Dear White People‘ where he was cast in the role of D’Unte.

Griffin was born on the 25th of December 1981, in Pittsburgh, Pennsylvania, USA. He holds American citizenship and is of African-American descent.

Matthews hasn’t yet disclosed his family details including his father and mother. However, he is the second child of his parents among three children. He has two brothers whose name is unknown at the moment.

Moving towards his academics, he graduated with a B.F.A. in musical theater from Carnegie Mellon University in Pittsburgh, PA.

Griffin is a founder of UgandaProject, a nonprofit organization that sponsors the educations of orphans living in Uganda. He founded the organization in 2005. Matthews along with his husband Matt co-wrote Witness Uganda which is based on the true story of Matthew’s humanitarian trips to Uganda.

Similarly, he also co-created Witness Uganda: The Documentary Musical premiered on February 4, 2014, at Cambridge’s American Repertory Theater. Besides, he is also a well-known actor who came into the limelight after appearing in television series like The Flight Attendant and Dear White People.

In the television series The Flight Attendant, he portrayed the role of Shane Evans along with popular personalities like Kaley Cuoco, Michiel Huisman, Zosia Mamet, and more.

Furthermore, he has appeared on the shows like Ballers and Law and order: SVU on HBO Max, Happy Valley (NBC Pilot), The Carrie Diaries, The Mentalist, Weeds, and more.

To date, Matthews doesn’t seem in any sorts of rumors and disputes that create headlines in the media. Also, he stays miles away from such controversial acts that could hamper his professional and personal life.

As per other online sources, Matthews has an estimated net worth of $100 thousand to $1 million throughout his primary profession as an actor. Moreover, his other assets, salary, yearly income are not available at the moment.

The actor has an impressive height of 6 feet 2 inches tall. Likely, he has average weight. In addition, he has wavy black hair with black pair of eyes as well. Further, he has tattoos on his chest and back neck.