Updated On January 26, 2023 | Published By: shahid | In controversy
Share this 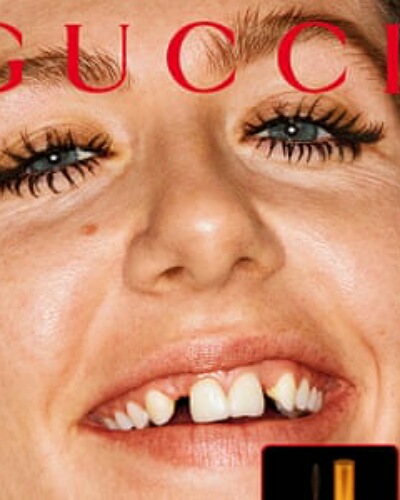 The famous Italian fashion house Gucci released a new L’Obscur mascara. And for the ad campaign, it used the services of the punk musician from New York, Dani Miller.

The ad reveals the gap-toothed Dani Miller widely smiling. She is wearing heavy black mascara and has a minimal foundation. Besides, she has kept her eyebrows natural.

The mascara costs £30 and is for an eccentric person who uses makeup to tell their own story of freedom, according to Alessandro Michele, the creative director of Gucci.

The brand company posted this ad photo on the brand’s Facebook page and it invited a lot of controversies. The ad got a mixed response and has turned out to be a controversial one.

The reactions to the Gucci ad

On seeing the Facebook page advertisement of Gucci’s new mascara, many people left their comments to it. One social media user wrote:

‘This definitely isn’t going to sell their mascara … Looks like she’s put on old mascara that she’s found in the bottom of a drawer,”

“Is this an SNL sketch?”

Some did not like Dani modeling for it. They felt that her unconventional look with two lateral missing incisors does not make her suitable for the ad. And an Instagram user commented thus:

One social media user did not like people talking ill of Dani at a time when fashion advocates are crying their lungs out for diversity and inclusion. The person wrote:

“I’m shocked at some people’s responses on here. People are publicly crying out for ‘real’ women to be used in their advertisements but when they do, all people can say is nasty things …”

The previous Gucci ad got criticism

This is not the first time that an advertisement with a realistic and unconventional model has caused an uproar from the people. Last year, there were 2 Gillette campaigns that drew a lot of flak.

The skincare brand Dove has been using realistic models since 2006 and has been always criticized for it.

This is the second Gucci ad to pair Dani and Martin. The first was for their lipstick in the summer of 2019. Dani had spoken frankly about her appearance at that time saying:

“There is space for everyone to be themselves, even in the beauty and fashion world! Hope it inspires everyone including the youth to love their quirks … Hate and exclusion are so washed out.”

She had also told Vogue:

“Your flaws are not actually flaws. Yes, there are traditional beauty standards, but if you don’t fit into that, you can still have a party with your quirks – and celebrate yourself.”