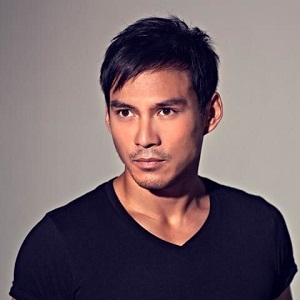 Guji Lorenzana is a married person. He exchanged the vows with his longtime girlfriend Cheska Nolasco. She is an interior designer.

The wedding took place at Green Sun Hotel in Makati on 27 Feb 2016 and was attended by their families and friends.

Then on Nov 10, 2019, Giji and Cheska were blessed with a child. They welcomed their daughter Cassidy Gianna.

Prior to this, Guji had a relationship with Kaye Abad in 2011. Their affair lasted for three years and was separated in the year 2014.

Who is Guji Lorenzana?

Guji Lorenzana is an American actor, host plus model. He is also a singer, songwriter, and DJ.

He was born as Gregory Lorenzana, Jr. on May 11, 1980, in Long Beach, California. His nationality is American and belongs to Asian ethnicity.

There is no more information available about his parents. However, he has a sister named Grace Lorenzana.

Concerning his educational background, he attended the University of California.

Guji Lorenzana made his professional T.V debut in the year 2008 and appeared in a T.V show titled “I Love Betty La Fea” as a contestant. Next year, in 2009, he made his appearances in more than five hits T.V shows including “Midnight DJ”, “Maalaala Mo Kaya: Storybook”, “Your Song Presents: Someone To Love”, etc.

He made his film debut in the year 2010 and starred as ‘Louie’ in a film titled “Paano Na Kaya”. In the same year, he appeared in the other two hits film including “Babe, I Love You” and “Till My Heartaches End”. From 2009 to 2011, he was associated with the T.V show titled “ASAP 09” as a contestant.

His single Five Days More came out in the year 2005 followed by Not Another Christmas album in 2006. Recently in 2017, he came up with two singles GUJI-We Are and Guji x Moophs – Paralyzed.

Similarly, he released his EP Guji Lorenzana in 2006 and LPs Without Your Love and Voizboys – Fusion.

Currently, there are no drastic rumors regarding Guji’s personal and professional life. It seems like he is doing the best job.

This actor has an estimated net worth of $500 thousand.

As per reports, the average salary of an actor is between $19k-$210k per year.

Regarding Guji Lorenzana’s body features, he has black eyes and black hair.