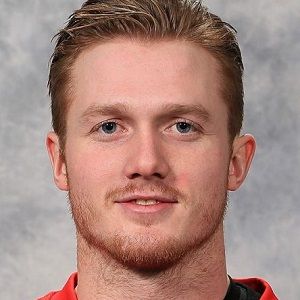 Gustav Nyquist is a married man as he married his girlfriend Danielle Barone. They married on 4th August 2017. Their marriage took place at Bastad, Sweden in front of family and friends in a lavish wedding ceremony.

They are living a happy life and there is news of their separation. Moreover, there is no information about his past relationships.

Who is Gustav Nyquist?

Gustav Nyquist is a professional ice hockey player from Sweden. He played ice hockey for the San Jose Sharks of the National Hockey League(NHL). He is famous for being drafted 121st overall by the Detroit Red Wings in the year 2008 NHL Entry Draft.

He was born on 1st September 1989 in Halmstad, Sweden. He was the son of Eva Nyquist and Fredrik Nyquist. Similarly, he and his family moved to the city of Malmo where he started playing hockey.

Likewise, he has a brother Oscar Nyquist who has also played junior hockey for the Wilkes-Barre/Scranton Knights of the Eastern Hockey League (EHL). His nationality is Swedish whereas his ethnicity is unknown.

Talking about his education, after completing high school, he enrolled at the University of Maine and played for the Black Bears.

Gustav Nyquist began playing hockey from the local youth team, Limhamn Hockey. Later, he joined the  Malmö Redhawks organization, playing for their under −16, −18 and −20 teams. Similarly, he played in the Malmo Redhawks organization. He represented Scania in the 2006 TV-pucken tournament, where Scania finished second to Gothenburg.

Likewise, he played three seasons for the University of Maine’s Black Bears of the NCAA’s Hockey East conference. As he led the team in points in all of his three seasons. He was the NCAA’s regular season scoring leader in the 2009–10 season.

Similarly, he made his professional hockey debut with the Red Wings’ American Hockey League (AHL) affiliate, the Grand Rapids Griffins. It was on 25 March 2011, in a game against the Texas Stars. Also, he made his NHL debut with Detroit on 1 November 2011, in a game against the Minnesota Wild. In the year 2012, he scored his first career NHL goal against Steve Mason of the Columbus Blue Jackets.

Likewise, he has won the AHL All-Rookie Team and AHL First All-Star Team.

Gustav Nyquist has the estimated net worth of $10 million. His current season salary is $5.5 million. Similarly, he is reported to sign a four-year contract worth $19 million contracts with Detroit Red Wings on July 10, 2015.

On 15 February 2017, he was suspended for six games for dangerously high-sticking Minnesota Wild defenseman Jared Spurgeon. He hit him in the face during a game between the two teams that took place three days earlier.

Now talking about his body measurements, he has a height of 5 feet 11 inches and weighs around 84 kg. Similarly, he has light brown hair color and green color eyes.