Guy Fieri is a celebrity chef and the winner of Food Network Star. He is married to his wife for over 26 years and has two kids.

Guy Fieri is currently married to Lori Fieri since 1995.

The couple is blessed with two sons: Hunter and Ryder Fieri. There is no information regarding his past relationships, affair, and rumors.

Their first meeting was not romantic but Guy says that he knew that Lori was the one when he saw her.

He has had a strong relationship with his wife for over 26 years. Also, he posts family photos on his social account which shows his innate love for them without any signs of complications. 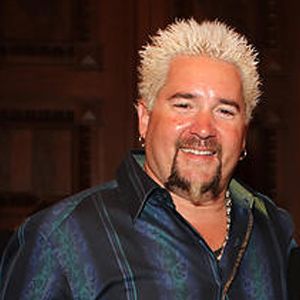 My wife and I have gone from being married at a young age to being where we are now — to get here, you have to be willing to adapt and understand.

It's all compromise and understanding.

I am the least likely person you'd ever catch on a cruise. I'm an outdoors guy. I don't like big crowds.

Who is Guy Fieri?

Guy Fieri is a restaurateur, author, game show host, and television personality who hails from America. He gained a lot of popularity and fame as the host of the popular television series on the Food Network.

Guy Fieri was born on January 22, 1968, in Columbus, Ohio, the U.S. His birth name is Guy Ramsay Ferry. He is the son of Penelope Anne (Price) and Lewis James Ferry.

He has a sister, Morgan Fieri. Furthermore, there are no details about his family background.

He is of American Nationality and belongs to mixed ethnicity of Italian, Scots-Irish (Northern Irish), and English.

As regards his education, he graduated from the University of Nevada with a Bachelor of Science in Hotel Management in the year 1990.

Besides these, there are no other facts about his education.

He started his career by opening a restaurant partnering with Steve Gruber in 1996 in California. They also opened restaurants in two more locations. Their restaurant is a combination of Southern BBQ with California-style sushi.

In 2005, he sent a videotape to the reality show named Next Food Network Star. Fortunately, he beat 1000 other entrants with his rock n roll personality.

After being selected for the Next Food Network Star, he started his debut television series named Guy’s Big Bite in 2006.

In the show, he travels the country to taste tasty, unpretentious foods. He became known for his spiky hair, tattoos, bowling shirts also skateboarder shorts.

Later on, Guy Fieri merged his love for food and music to start the show named the Guy Fieri Roadshow. This show featured a DJ, drinks, and cooking presentations.

He has also written numerous books such as Guy Fieri Food: More Than 150 Off-The-Hook Recipes released in 2011.

Beyond cooking, he became an anchor in 2010 where he guides contestants in the game show named 60-second challenges on Minute to Win It.

As of 2022, his net worth is estimated at $197 Million, whereas his salary is $8 Million according to the sources.

Fieri signed a three-year contract with Food Network worth an estimated $80 million in May 2021.

Likewise, in 2021, the Fieri family purchased a house in West Palm Beach, Florida.

In his career, his name has never been in any rumors and controversy. He has always been admired for his rock n roll personality and at the same time showing an innate passion for cooking and food.

Also, he has always been a professional in what he does without attracting any unwanted rumors and controversy.

Guy Fieri has a pretty bulky body structure. He has a height of 5 feet and 10 inches and weighs 85kg.

He has a blue eye color and dyed blonde hair color.

As a result of a successful career as a comedian, Fieri has secured decent followers on popular social networks such as Facebook, and Twitter.

Why did Guy Fieri change his name?

How did Morgan Fieri pass away?