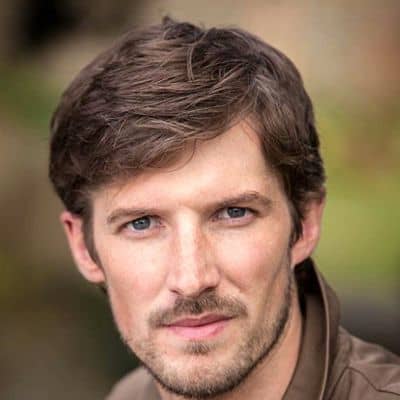 Talking about his love life, the handsome actor, Gwilym Lee is presently single and he is not dating anyone at the moment. He might be focused on his career at the moment.

We might see him with his future partner in the coming days. However, he is a good friend of Australian actress, Miranda Tapsell. The duo has posted lots of their offscreen memories on their social media account.

Who is Gwilym Lee?

Gwilym Lee is a well-recognized British actor and television star. Lee is widely famed for his role in Jamestown, Midsomer Murders, Top End Wedding, The Great, and so on.

Moreover, he is also renowned for playing guitarist Brian May in the Queen biopic Bohemian Rhapsody.

Gwilym Lee was born on 24 November 1983. At present, his age is 37 years old. Likewise, his birthplace is Bristol, England.

Gwilym is the son of his father, Tom Lee whereas his mother is Ceinwen. Moreover, he has three older siblings named, Geraint, Owen, and Rhiannon.

Talking about his nationality, Lee holds a British identity whereas his ethnicity is Welsh.

Regarding education, the actor studied English literature at Cardiff University and drama at Guildhall School of Music and Drama. He received the Guildhall Gold Medal in 2008.

Professionally, Gwilym joined a drama group as a teen. Later, he featured in the 1997-98 television adaptation of the Animal Ark book. He then started working on Richard III with the Royal Shakespeare Company. Later, Lee featured in a leading role in the final series of Land Girls in 2011.

The actor has also made many guest appearances on television such as Ashes to Ashes, Fresh Meat, Monroe, and Henry V. Additionally, the English star commenced in the National Theatre’s production of Oedipus in 2008. Next year, he performed to Jude Law’s Hamlet in the Donmar West End season.

Gwilym also earned first prize in the 2011 Ian Charleson Award for his role as Edgar in the 2010 King Lear production at the Donmar Warehouse. In 2012, he featured in the Donmar Trafalgar Studios production of Aleksei Arbuzov’s The Promise.

Later, Lee featured as DCI Barnaby’s new sergeant, DS Charlie Nelson in the 16th series of Midsomer Murders. He also starred in Versailles at the Donmar Warehouse. Gwilym has also performed guitarist Brian May in the Queen biopic Bohemian Rhapsody in 2018.

A talented actor, Gwilym has earned a handsome amount of money from his profession. He has been active in his profession from the year 1997 till the present.

It is reported that Gwilym Lee has an estimated net worth of $3 million.

However, the prominent superstar has not disclosed his exact salary, earnings, and assets details till now.

Gwilym has never been part of any controversial matter or rumors till now. The actor has been preoccupied with his professional and private life.

It seems that Lee prefers enjoying his personal life and does not want to merge it with his professional life.

37 years old actor, Gwilym has dashing looks, a muscular and athletic body, and an admirable personality. He stands at a height of 6 feet 2 inches. Also, he has a balanced bodyweight of 81 kg.

Furthermore, Lee has blue eyes whereas his hair is light brown.

Nevertheless, the famous star has never mentioned other physical details in the public yet.

Regarding his social media presence, Gwilym Lee is an active personality on social media. Gwilym has more than 511k followers on his official Instagram account @mrgwilymlee.

He is also active on Twitter with around 63.7k followers.

Moreover, Lee is also available on Facebook with nearly 3.8k fans and supporters.