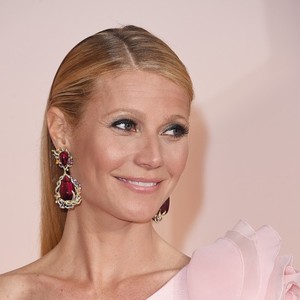 Beauty, to me, is about being comfortable in your own skin. That, or a kick-ass red lipstick

My playground was the theatre. I'd sit and watch my mother pretend for a living. As a young girl, that's pretty seductive.

Gwyneth Paltrow has been in a number of relationships in her life. In her early career days, she was in a relationship with Robert Sean Leonard. After that, she dated actor Donovan Leitch Jr. from 1993 t0 1995.

They had two children named Apple Blythe Alison Martin and Moses Bruce Anthony Martin. After 13 years of their marriage, they separated in 2014. Their divorce was finalized in 2016.

The couple has been together for years now and their relationship is going very well.

Who is Gwyneth Paltrow?

She won an Academy Award for Best Actress for her role in the 1998 film Shakespeare In Love.  Paltrow also won a Golden Globe Award and two Screen Actors Guild Awards for the same film.

Paltrow was born on 27 September 1972, in Los Angeles, California, USA. She is an American by nationality and she is of Ashkenazi Jewish, German, English, and Irish ethnicity.

Her birth name is Gwyneth Kate Paltrow. She is the daughter of actress Blythe Danner(mother) and film producer/director Bruce Paltrow(father). Her mother is a Tony Award-winning actress. Her father was Jewish, while her mother is from a Christian background.

She has a younger brother, Jake Paltrow who is a director and screenwriter. Paltrow along with her family moved to New York when she was 11 years old. Paltrow’s half-cousin is actress Katherine Moennig.

She is a second cousin of former U.S. Congresswoman Gabrielle Giffords and her uncle is the opera singer and actor Harry Danner.

She went to Crossroads School, in Santa Monica. After that, she was enrolled in the Spence School, a private girls’ school in New York City.

She later studied anthropology at the University of California, Santa Barbara, but dropped out to pursue her acting career.

Gwyneth Paltrow made her acting debut in the film High (1989), a TV film her father directed. She made her professional stage debut at the Williamstown Theatre Festival in Massachusetts in 1990. After that, she had roles in television movies Cruel Doubt (1992) and Deadly Relations (1993).

Her first feature film role was in the noir drama Flesh and Bone (1993) as the much-younger girlfriend of James Caan. She gained early notice for her work in films such as the thriller Seven (1995) and the period drama Emma (1996).

For her role in Shakespeare in Love (1998), she won an Academy Award, a Golden Globe Award and two Screen Actors Guild Awards. She also had roles in the films The Talented Mr. Ripley (1999), The Royal Tenenbaums (2001), Shallow Hal (2001), and Proof (2005), for which she earned a Golden Globe nomination.

She won a “Primetime Emmy Award for Outstanding Guest Actress in a Comedy” Series in 2011 for her role as Holly Holliday on the Fox television series Glee. In 2015, she appeared as Johanna Mortdecai in Mortdecai (2015).

There is no information about her salary but she has a net worth of 100 million dollars.

There were rumors that she slept with the singer, Jay-Z. He is a married man and when asked about it to her she said that the news was completely absurd.

She has a blue eye color and her hair color is blonde. Her shoe size is 9 (US) and her dress size is 4 (US).

Gwyneth Paltrow reveals that her marriage to Brad Falchuk had not one but two celebrity chefs!