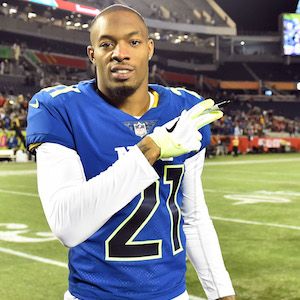 To be honest, football is my main goal. I never really had a backup plan

Me, coming from a low-income background, I really didn't take my studies serious as a young kid

I just want to give back and kind of be a resource for younger generations.

Ha Ha Clinton-Dix is in a relationship. His girlfriend’s name is Bria Moody. She is a lash professional. She has a business page named #beelashed. The couple met each other while attending Alabama University. Dix keeps sharing the pictures of them but his girlfriend is opposite. She is a shy type of a person and does not like to share about her relationship on her social media handle.

Who is Ha Ha Clinton-Dix?

Ha Ha Clinton-Dix is an American football free safety. He plays for the Green Bay Packers of the National Football League (NFL). He played for his college football team at Alabama.

Clinton-Dix was born Ha’Sean Treshon Clinton-Dix on December 21, 1992, in Eatonville, Florida. He was nicknamed “Ha Ha” after he was born by his grandmother.

His mother’s name is Nicole Dix and father’s name is unknown. He has a sister whose name is Dominique Dix. He does not have any brother. His ethnicity is Afro-American and nationality is American.

Clinton-Dix attended his first and sophomore years at Edgewater High School. During his college, he played running back. He was transferred to Dr. Phillips High School before his junior years.

He not only played football but also played basketball and track. In football, he was an All-American defensive back and kick returner at Dr. Phillips.

He played against Seattle Seahawks’ quarterback Russell Wilson and Detroit Lions in the year 2014. In 2015, he played against San Diego Chargers and lost by 16–18. He made a loss for his team and it was his first loss since 1991. He also lost against Cardinals quarterback Carson Palmer by 20–26.

In 2016, Ha Ha was rewarded as NFC Defensive Player of the Week. His team also became the Second-Team NFL AP All-Pro team. In NFL Top 100 Players of 2017 list, he was ranked 77th by his fellow players.

Being a member of the Alabama Crimson Tide, he became BCS National Champion twice.

While his salary is around $3.5 million per season, he has a value of $11 million net worth.

There are no any significant rumors and controversies regarding Ha Ha Clinton-Dix till date.

He has a good height of 6 feet 1 inches with body weight 94 kg. He has black hair color and his eye color is dark brown. There is no information about his shoe size.